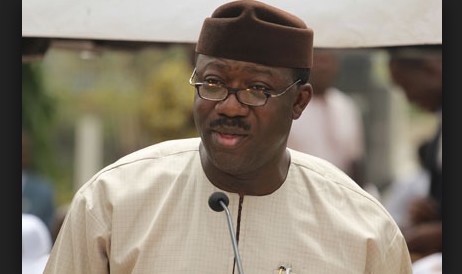 The governorship candidate of the All Progressives Congress(APC) in Ekiti State, Kayode Fayemi reportedly escaped assassination in the state on Friday, June 1, 2018.

Multiple sources said the Fayemi campaign train was attacked in Ado-Ekiti, the state capital, around 5 pm  allegedly by a Mobile Policeman in uniform (MOPOL) who was said to have fired a shot aimed at the governorship aspirant.

Although Fayemi escaped, the gunshot reportedly hit a former House of Reps member, Hon. Opeyemi Bamidele and three others. One is said to have died.

The welcome party and  a large crowd of party faithful and supporters had moved from Ikere, where Fayemi was received after his arrival from Abuja, to Ado Ekiti and all was going on well until gunshots broke out and caused pandemonium. The mobile police officer, according to some of the witnesses at the scene, had allegedly mishandled his rifle and in the process, accidentally shot and injured Mr Bamidele and the five other people. However, some of the revelling party members had judged the incident to be deliberate and descended on the mobile policeman, beating him with clubs, sticks and stones before he was rescued by other policemen and taken away. Yet, some of the witnesses claimed that the mobile policeman had lost control of his rifle after he had engaged some suspected thugs in an altercation.

A statement by the APC in the state listed those injured as Olabode Joshua, Olanrewaju Gbenga, Adebayo Ogunjemilehin, Ogunmodede Oluwole and Alex Adeleye and explained that Bamidele and the other victims are currently receiving treatment at the Ekiti State University Teaching Hospital.

The statement, signed by the publicity secretary of the party, Chief Taiwo Olatunbosun, claimed that the shooting was targeted at Dr Fayemi, saying “one of the assailants dressed in mobile police uniform was apprehended and he is now helping the police in their investigation.” The incident had caused a melee and created panic among the populace at the Ajilosun area of the state capital, which had already been at a standstill due to heavy vehicular presence on the road. Before the pandemonium, Governor Rotimi Akeredolu, Prince Adedayo Adeyeye and other dignitaries had joined Fayemi from Akure to Ado Ekiti. Fayemi, while addressing party members, said he had come home to rescue Ekiti from poverty and neglect, which he said was caused by the PDP administration. Akeredolu in his speech applauded APC members for putting behind them the crisis after their primary election, saying the crowd he saw was a sign that Ekiti remained the stronghold of the APC. He said: “Fayemi has returned with full force to reclaim the land. He needs your support and this task shall be achieved in the mighty name of God.” Fayemi said: “We are here to work for Ekiti and our party leaders and this we are going to do together because it is a collective responsibility.”
Post Views: 757