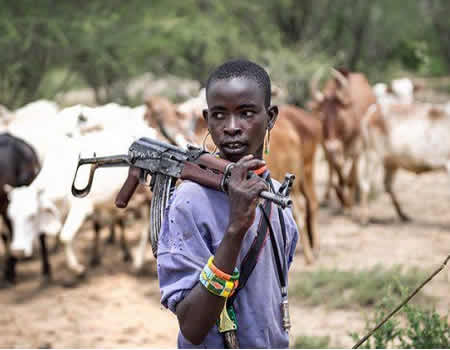 GUNMEN suspected to be Fulani herdsmen in the early hours of Thursday invaded a community in Barakin Ladi local government area of Plateau State and snuffed lives out of four members of a family in a barbaric manner. The affected local government area has been under the invasion of herdsmen in the past two months. Recently, five people were killed in the council area while returning from their farm and their corpses dumped in the bush.
Plateau Police Public Relation Officer ASP Terna Tyopev who in a statement confirmed the unfortunate incident said one Karen Mahan of Kai village reported at the Barkin Ladi Police Division on Thursday at about 2:00 pm that unknown gunmen suspected to be Fulani Herdsmen invaded the house of his elder brother one Dauda Mahan ‘M’ of the same address.
The statement pointed out that the gunmen shot and killed four persons identified as Dauda Mahan aged 54YRS, Mangai Agwon AGED 46yrs, Christian Mangai AGED 15YRS and JOHN MANGAI ‘M’ AGED 10YRS, all of whom were members of the same family. According to the statement, on receipt of the information, a team of detectives led by the Divisional Police Officer (DPO) Barkin Ladi Division visited the scene of the crime for an on the spot assessment. It pointed out that bodies of those attacked were recovered and taken to the General Hospital Barkin Ladi where they were confirmed dead by the doctor on duty and the corpses deposited in the hospital’s mortuary. The police public relation officer ASP Terna Tyopev said the state police command has commenced an investigation into the unfortunate attack to track and arrest the perpetrators of the dastardly act and to make them face the consequences of their actions.
Post Views: 778