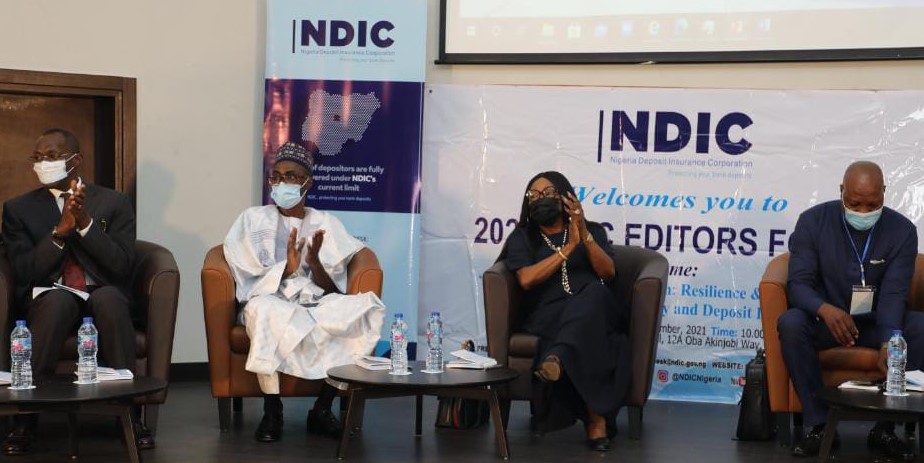 In a more risk-based approach aimed at improving resilience and stemming failure, the Nigeria Deposit Insurance Corporation (NDIC) said it has begun moves to scale up banks’ premium/contribution to its Deposit Insurance Fund (DIF).

NDIC Managing Director/Chief Executive, Mr. Bello Hassan, who disclosed this in Lagos at the weekend during the 2021 NDIC Editors Forum, said the measure also includes the agency’s timely support to insured institutions.

Referencing the theme of the meeting, “Enduring Extreme Disruptions: Resilience & Reinvention for Banking System Stability & Deposit Insurance,” Hassan said the move was in response to the global “extreme disruptions” to the traditional banking system, particularly with the devastating effects of Covid-19, and the emergence of Fintech and similar enterprises in the financial services sector.

“We have commenced the review of our approach to the determination of premium/contribution by banks to our Deposit Insurance Fund (DIF) to a more risk-based approach to ensure that the probability of the risk crystallising becomes a major factor in the pricing methodology of our premium going forward,” he stated.

“On timely support to insured institutions, we have identified the need to reconsider our criteria for qualification of financial institutions to provide realistic terms and conditions in order to facilitate prompt access to technical and/or financial support in line with the Sec (2)(1)(b) of the NDIC Act, while also protecting the corporation from possible downside risk.

“We have commenced the process of strengthening our failure resolution and liquidation mandate through the improvement of our internal processes and procedures, as well as enhancing effective collaboration with relevant stakeholders to ensure that the corporation discharges its responsibilities more efficiently.

“This has become imperative to us given the need to implement prompt corrective actions on ailing or failed banks, improve our processes in addressing challenges in liquidation and most importantly provide timely reimbursement of insured sums to depositors of failed banks.”

According to him, NDIC’s key policy thrust is “to scale up the deposit insurance framework, timely support to insured institutions as and when required, faster and orderly resolutions of failed insured institutions, as well as assistance to the monetary authorities in promoting stability in the banking system.”

To achieve these set objectives, his management team places “a high premium on working harmoniously with all strategic stakeholders towards the realisation of the public policy objectives for which the corporation was established. We are also strongly convinced that the media has a critical role to play in the process.”

Meanwhile, under deposit insurance as a distinct mandate of the corporation, empirical statistics reveal that “the corporation’s coverage limits are not only adequate but robust enough to engender confidence in our banking system, he noted.

Nevertheless, he regretted that the agency’s operations were being set back by “slow recovery and realisation of assets, slow adjudication of cases, depositors’ apathy toward deposit verification, as well as indifference of customers of banks in-liquidation with small balances, among others.”

These notwithstanding, “several failure resolution initiatives such as Open Bank Assistance (OBA), Purchase & Assumption (P&A) and Mergers & Acquisition (M&A) had been adopted in resolving distress in various banks from 1989, culminating in the novel Bridge Bank option to resolve four problem banks in 2011 and 2018.

“The bridge bank option did not only prevent a systemic crisis, it secured N1.021 trillion deposits, which ensured that depositors had continued access to their funds and financial services. The implementation of the Bridge Bank option also saved over 12,667 jobs while over 877 branch networks and services of the affected banks were maintained.

“Most importantly, the payment of N1.274 billion to 991 creditors and ₦4.886 billion to 965 shareholders of banks in-liquidation as at 30th September 2021 underscored the corporation’s success story in bank liquidation.

“What this implies is that the corporation had realised enough assets to pay all the insured and uninsured depositors of the banks that present themselves for payment. Currently, 19 out of the 49 DMBs in-liquidation fall into this category.

To the media, Hassan called for continued support, urging the editors to provide informed scrutiny and analysis of the agency’s activities and assist other stakeholders with the right insight into its role as member of the financial safety net, as well as the contributions of DIS to the stability of Nigeria’s financial system.

He described the meeting as timely to re-enforce the value-adding interface with the highest echelon of the nation’s media industry, recalling that the corporation introduced the forum in 2012 as an annual interactive platform with editors to deepen their collective understanding of the implementation of the Deposit Insurance System (DIS) among a broad spectrum of Nigerians.

This is “with particular emphasis on the corporation’s mandate and contributions to the nation’s financial system stability, along with the challenges it encounters in the process.

“Today, more than ever before, the same objectives for the initiation of the Editor’s Forum cannot be over-emphasized given the various challenges in the financial system as a result of the Covid-19 pandemic and its generational impact on global economies,” he said.