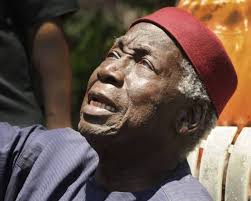 Deputy President of the Senate, Ike Ekweremadu, has expressed sadness at the death of the former President-General of Ohanaeze Ndigbo, Dr. Dozie Ikedife, describing it as a grave loss to Ndigbo in particular and the nation in general.

In a statement by his Special Adviser (Media), Uche Anichukwu, the Deputy President of the Senate described the late surgeon as “a patriot and medical practitioner per excellence,” noting that Ikedife “was a patriot and tested leader who was deeply committed to the fatherland.

“As President-General of Ohanaeze Ndigbo, he not only advanced the Igbo cause but also championed the struggle for a just and equitable society, where no man or woman is oppressed.

“He was a fine gentleman and firebrand in one. He has fought a good fight and history will be kind to him. May his soul rest in perfect peace.”

Ekweremadu prayed God to grant the deceased Ohanaeze chieftain’s family and the good people of Anambra State, Ndigbo and the entire nation the fortitude to bear the irreversible loss.