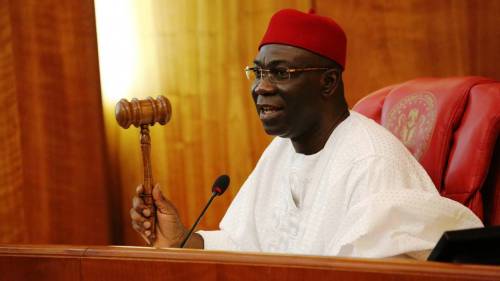 Deputy Senate President Ike Ekweremadu did not honour an invitation from the Economic and Financial Crimes Commission (EFCC) yesterday to answer questions over corruption allegations. EFCC sources told Daily Trust that Ekweramadu did not show up despite the invitation extended to him by the Commission. Daily Trust gathered that security operatives from the EFCC had yesterday cordoned off the Apo residence of the Deputy Senate President. At the time of filing this report yesterday evening, the operatives were said to have been withdrawn without arresting Ekewramadu. Attempts to contact the spokesman of the EFCC, Wilson Uwujaren were unsuccessful as his mobile phone number was not reachable. EFCC letter to Ekweremadu, dated July 24, a copy of which was seen by Daily Trust also requested that he submit himself to the EFCC at 10 am yesterday. The letter was titled; ‘case of conspiracy, abuse of office and money laundering,’ signed by one Muhammed Umar Abba as Director of Operations. The letter noted that, “This commission is investigating the above-mentioned case in which your name features prominently and the need to obtain certain clarification from you became imperative.” It was gathered that the EFCC expects Ekweremadu to still honour the invitation at a later date.
Post Views: 791