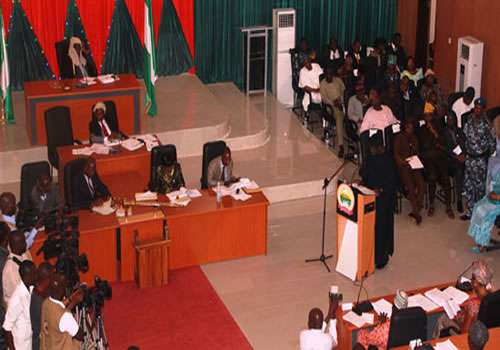 The Ekiti State House of Assembly, on Thursday hinted on the possibility of sending the Acting Chairman of the Economic and Financial Crimes Commission (EFCC), Ibrahim Magu to jail over what it described as the illegal arrest of two officials of the state. Recall that the anti-graft agency had arrested the state’s Finance Commissioner, Toyin Ojo and Accountant General of the state, Yemisi Owolabi over alleged misappropriation of Paris Loan Refund. The duo were, however, released unconditionally after two weeks of detention in the anti-graft agency’s custody. Chairman, House Committee on information of the Assembly, Samuel Omotosho made the submission while addressing top government functionaries and heads of MDAs, led by the state’s Head of Service, Gbenga Faseluka. Omotosho, who is representing Oye Constituency in Oye Local Government Area of the state, said the constitution of Nigeria, 1999 as amended, supersedes an Act of the National Assembly which created the EFCC. He maintained that the only organ of government empowered to probe alleged misappropriation of funds by officials of the state government remains the state Assembly and not the EFCC. Omotosho said, “What the EFCC has done by invading and arresting the two officials on September 28 is tantamount to illegality, witch-hunt, unjust humiliation and oppression of the officials. “This is why the matter has been taken up by the state government which is instituting a legal action against Mr. Ibrahim Magu. “We want to state that Magu could be jailed for his illegal arrest and subjecting the officials to two weeks’ emotional and mental torture for no just cause.”
Post Views: 938