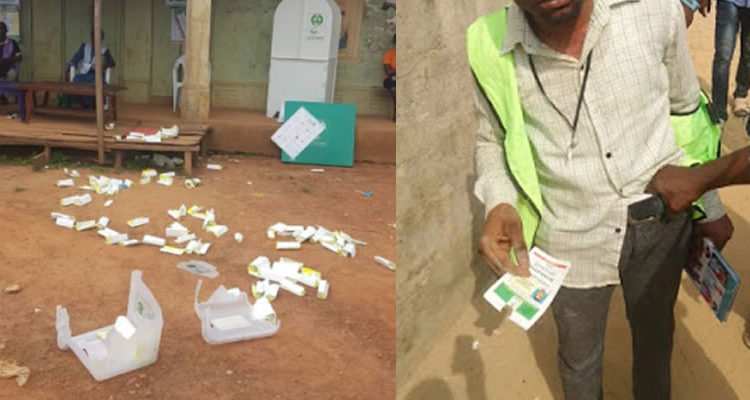 By Dayo Johnson Ado Ekiti THE governorship candidates of the All Progressives Congress(APC) Kayode Fayemi and Peoples Democratic Party, PDP, Prof Kokapo Olusola in the Ekiti election have expressed satisfaction in the process. However some thugs reportedly stormed some centres in Ado Ekiti, the state capital where voting were distrupted. No fewer than five thugs who stormed Mary lmmaculate , Oke ilado, polling unit 008 and ldofin, Father Blessing house, Ado LGA snatched and snatched two ballot boxes. Reports across the state had it that the card readers malfunctioned in many voting centres across the centres. They expressed confidence that the will if the people will prevail. While, Dr Fayemi described the process as peaceful, credible and peaceful, Olusola said except some vote buying reports reaching him and thuggery the exercise was satisfactory Fayemi spoke after he voted at Ogilolo ward 11, unit 009 in Isan Ekiti, Oye Local Government area of the state while Olusola spoke at his ward 2 unit 7 Okeruku in lkere Ekiti. Fayemi said that “Nigerians have decided to chose democracy over dictatorship and authoritarian, that is why all of us must guard this democracy jealously”, He said there were reports that the smart card readers were malfunctioning in some towns with INEC officials having hectic times to rectify it. Fayemi said: “With the news we have been gathering around, the process has been okay for now. So, I have faith in this election. Kolapo who was eventually allowed to voted after the third attempt said that “/the INEC has eventually found a way out of the problem “The INEC commissioners who came around has intervened and I was allowed to vote. They said that my votes card would have to be withdrawn and issued another one. He said despite the malfunctioning of the card reader “l still have confidence in the sysyem and my the grace of God am coasting home to victory.” Reports across I dictated that the card readers slowed down the process where it worked while many returned to their houses following the malfunctioning of the card reader. Voters at Ayede Ekiti also lodged similar complaints that while their PVCs were confirmed by the card readers, their fingerprints were not detected by the device.
Post Views: 966