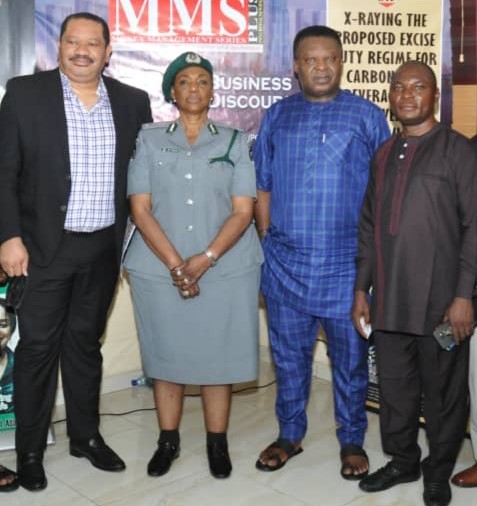 Manufacturers of carbonated alcoholic and non-alcoholic drinks will suffer a 39.5 per cent sales revenue loss amounting to over N1.9 trillion between 2022 and 2025 should Nigeria implement its planned excise duty on carbonated beverages, the Manufacturers Association of Nigeria (MAN) has warned.

The country will further suffer huge job losses if this burden is added to the already unconducive manufacturing environment, plagued by a sharp gap in available infrastructure, poor currency strength and citizens’ declining financial power.

Speaking Tuesday in Lagos during the MMS Business Discourse with the theme, “X-raying the Proposed Excise Duty Regime for Carbonated Beverages in a Recovering Economy,” Chairman of the Fruit Juice Producers branch of MAN, Mr. Fred Chiazor, warned of adverse consequences on jobs and supply chain businesses should the taxes be implemented.

According to MAN, “government could (also) lose up to N1.97 billion in Value Added Tax (VAT), EIT fund and Collective Investment Trust (CIT) revenues occasioned by the drop in industry performance” as the sector sheds its current 35 per cent contribution to the GDP.

Asking that the policy be shelved in view of such huge negative impact on an already suffering economy, MAN urged the Federal Government to rather introduce fiscal palliatives and tax rebate.

Similarly, the President of Water Producers Association of Nigeria (WAPAN), Mackson Odiri Egberi, stated that with the chemicals in use being imported and producers already paying import duties, excise duty on water will put the product beyond ordinary citizens and either compel shutdown of companies comprise on quality.

In same vein, a member of the Nigeria Economic Summit Group (NESG), Dr. Ikenna Nwosu, advised the federal Government to shelve the policy for at least one year and thoroughly x-ray its implications on the nation and the health of its economy with industry stakeholders.

Citing the recent advice by the International Monetary Fund (IMF) and World Trade Organisation (WTO) to governments to suspend taxes for one year to heal their businesses from the global fiscal challenges, Nwosu said the interval would also enable the economy and manufacturers recover from the effects of the pandemic.

However, the Comptroller-General of the Nigeria Customs Service (NCS), Col. Hammed Ali (rtd), contended that the nationwide production and consumption of carbonated non-alcoholic drinks would yield significant revenue rise from taxes if the products are put under excise control.

In a paper titled, “Merits and Demerits of Excise Duty in a Covid-19 Recovering Economy,” Ali stated that bringing the carbonated non-alcoholic and alcoholic drinks under excise control would reduce the over-dependence on oil/import duty revenue.

Also, “the health and environment hazards presented by the production and consumption of carbonated drinks will be ameliorated bringing them under regulation and control,” Ali, who was represented by the Controller, Lagos Industrial Command, Monica Shaahu, stated.

“Excise traders under the new regime are likely to think of exportation to enjoy the duty-free delivery incentives from the federal government, thereby attracting more forex to the economy.

“Given the lessons from the impact of Covid-19, many nations of the world have restrategised their economic system in a more diversified way to achieve a robust, stable and prosperous economy with a long-term benefit.

“For instance, Coca-Cola – the largest conglomerate which produces carbonated drinks, pays excise duty in other host-countries apart from Nigeria. This is an unhealthy economic advantage for their products coming from nearby countries.”

Though Ali insisted that the policy would only temporarily affect excise traders who are not presently paying duties, he admitted that “invariably, job losses and possible price hike, which will affect the final consumers, may occur.”

Equally allaying concerns about the health of the economy, Executive Secretary of the Nigerian Shippers’ Council (NSC), Emmanuel Jime, said the proposed tax will not affect Nigeria’s competitiveness at the African Continental Free Trade Agreement (AfCFTA).

Rather, he urged industry stakeholders to be more concerned about other logistics and infrastructure challenges that put Nigeria at a disadvantage in regional trade.

According to Jime, who was represented by the NSC Director of Consumer Affairs, Cajetan Agu, “AfCFTA is a rule-based market. Instead of focusing on the issue of local taxes, we should focus on Nigeria’s area of advantage.“

He asked, “what’s the level of automation at Nigerian ports? Are there scanners? Nigeria isn’t connected to other nations via rail. Is there a sound logistics platform in the country to support AfCFTA?”