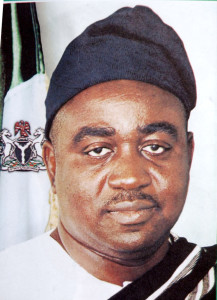 Former governor of Benue State, Gabriel Suswam, has reportedly been arrested by the Department of State Services (DSS) in connection to the insecurity issues that have enveloped the state this year.

According to a report by Channels Television, Suswam was arrested after incumbent, Governor Samuel Ortom, allegedly wrote a petition to the the DSS. A source who’s reportedly close to the governor said that Ortom accused Suswam of allegedly planning to make the state ungovernable.

It was reported that Suswam was invited by the agency on Tuesday, June 19, 2018, on the suspicion that he was habouring Terwase Akwaza, aka Ghana, a man declared wanted by the police in connection to the killing of about 17 people in Zaki Biam, Benue State, in March 2017. Akwaza has also been linked to the incessant killings that have happened in many Benue villages.

Suswam had previously been arrested in 2017 and held for two months after operatives recovered a large cache of arms, ammunitions and other incriminating items from an Abuja property allegedly belonging to him.