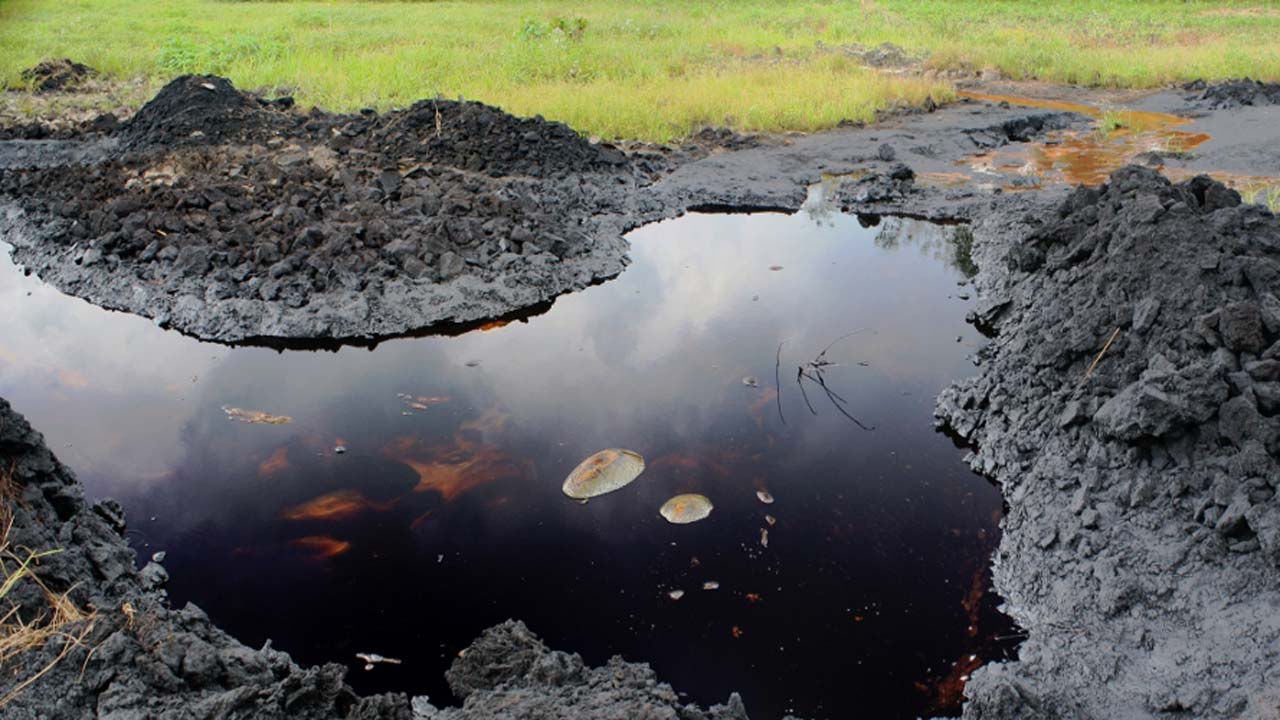 A devastating oil spillage has occurred on the Trans Ramos crude oil pipeline owned by Shell Petroleum Development Company (SPDC), in Odimodi Community in Burutu Local Government Area of Delta state. The crude oil spillage has already spread to over fifty communities under the Odimodi Federated Communities and others in the creek. Following distress calls, the Member representing Burutu Federal Constituency in the House of Representatives, Honourable Julius Pondi,the Member representing Burutu 1 Constituency in the State House of Assembly, Honourable Daniel Yingi and the PDP Chairman, Delta South Senatorial district, Prince Emman Amgbaduba among others visited the community to ascertain and get an on the spot assessment of the situation. Honourables Pondi and Yingi who sympathised with the various communities affected by the spillage expressed serious concern that Shell had not shown any commitments to the plight of the people since the spillage occurred. They said though Shell had put measures in place to contain the spread and to recover crude oil from the damaged pipeline the spillage had polluted the entire area destroying aquatic life which had made fishing which is the major occupation of the people impossible. The Federal and State lawmakers decried the situation that the report of the Joint Investigative Visit JIV team consisting of Shell,Directorate of Petroleum Resources,DPR and the National Oil Spill Detection and Response Agency NOSDRA on the spillage was yet to be made public . The lawmakers emphasised the need for the JIV report to be released stressing that the spilage was not as a result of sabotage but due to equipment failure on the part of Shell hence the company was trying to avoid it’s responsibility to the community. They expressed worry that multinational oil companies have always devised means of shortchanging communities whenever a spillage occurred as Shell was yet to meet with the community to discuss with them and assuage their plight. Honourables Pondi and Yingi called on Shell to immediately provide relief materials and medicals to all the affected communities promising to raise the issue on the floor of the National Assembly and Delta State House of Assembly to draw the attention of the international community and government to their plight of the people. While appealing for the youths and affected communities to remain calm and not take laws into their hands, Honourables Pondi and Yingi assured the people that they would not be abandoned. The Youth President, Odimodi Community, Comrade Dere Potoki and Assistant Secretary, Comrade Aaron Amakubakuro said the spillage occurred on four different points on the crude oil pipeline since on the 24th of April,2018 stressing that the actions of Shell was oppressive to the community. They said Shell was more concerned about how to recover crude oil from the damaged pipeline without thinking of providing relief materials and medicals to the affected communities adding that the youths were already getting agitated. The Youth leaders noted that Shell had failed to do mapping to know the entire areas affected by the spillage as their patience was fast running out with the company. Some women who spoke said the aquatic life of the communities and their farmlands as well as fishing nets have been destroyed by the spillage and called for urgent attention from Shell and the government as hunger had set in as they can no longer go for fishing. They expressed fears of the possible outbreak of an epidemic due to the spillage saying that it was painful that Shell was more concerned about crude oil than the people and communities where they are operating.
Post Views: 886