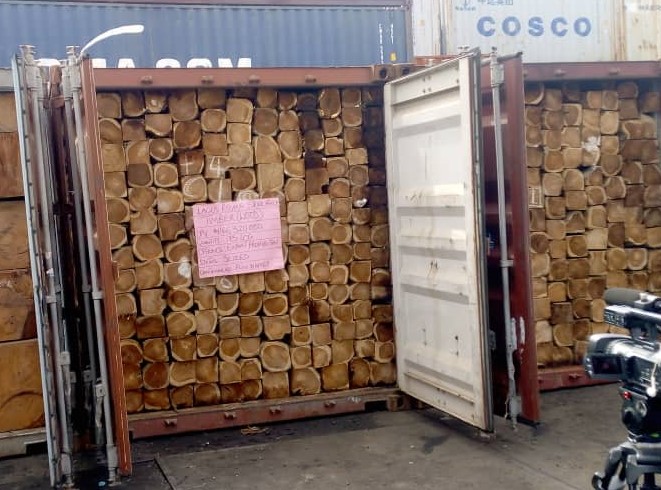 Four containers of unprocessed woods worth N373.5 million have been impounded in Lagos by the Controller-General of Customs Strike Force Team A as they were about being shipped to Asia.

Displaying the cargo Wednesday at the export terminal in Ikorodu, Lagos, the Coordinator of CGC Strike Force Team A, DC Ahmadu Shuaibu, said the team has shifted attention to identifying dangerous cargoes right inside the seaports before they are cleared.

Export of unprocessed woods, alongside allied products, was banned in 2019 by the Federal Government in order to protect the nation’s forests, but smugglers have continued to defy the extant export prohibition list, Shuaibu noted.

He regretted that crime-minded businessmen were exploiting government’s efforts to improve export trade to indulge in illegal shipment of woods to Asia, but vowed that his team would go after the sponsors of the illicit trade and cripple their finances.

According to him, “among the other seized items were 550 cartons of foot-wears, 343 rolls of synthetic grass cover and 1,709x50kg foreign parboiled rice with a cumulative Duty Paid Value (DPV) of N664.6 million.

“Between January and June 2021, a total of 86 seizures were made and were found to have contravened different sections of the Customs and Excise Act.

“The goods have DPV of N1.65 billion, and sequel to meticulous documentary checks, the ICT components of the team recovered the sum of N1.9 billion from Demand Notices (DN) raised within the period under review.”

He urged importers, exporters and traders to comply with extant laws and policies aimed at reviving moribund industries and sustaining the existing ones, mindful of the socio-economic, security and health effects of illicit trade on the nation’s economy.