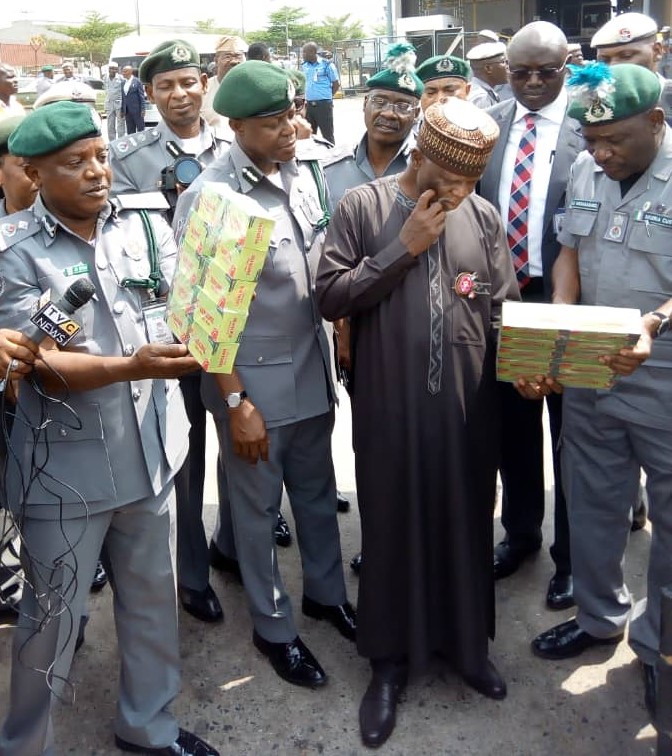 In a major boost to patriotism, the Nigeria Customs Service (NCS) has announced the seizure of 40 units of 40ft containers of tramadol and other controlled pharmaceutical products imported from India, with Duty Paid Value (DPV) of N7.32 billion.

The Controller-General of Customs, Col. Hameed Ali (rtd), said in Lagos Thursday that one of the 40 containers had already exited the Apapa Port but was intercepted by the agency’s Federal Operations Unit (FOU) Zone A, Ikeja.

According to Ali, who displayed the sum of $274,000 ((N100 million), which was part of the $412,000 (N150 million) bribe offered, said the importers, desperate to have at least a container released to them, had bribed the officers with N150 million, assuring of larger sums if this succeeds.

However, “the officers played along and eventually arrested three suspects with the money,” concerned that some Nigerians were “ready to make money at the expense of human lives by bringing in such quantity of drugs that have grave consequences on health and national security.”

The Apapa Command also seized two aircraft – a knocked down helicopter with Reg. No. SN-BLI in 388 bags and loaded in container number PONU 7789246 for export. Falsely declared as cashew nuts, the transaction violates Section 36 of the Customs and Excise Management Act (CEMA) Cap C45, LFN 2004.

The second aircraft, a Cessna 182A, imported from the United States, was loaded in container number MRKU 4457663 but intercepted by customs officers.

It was declared through SGD No. C130308 of 09/10/2018 but seized for the owner(s’) failure to present End-User-Certificate from the Office of the National Security Adviser, and approval from the Nigeria Civil Aviation Authority, contrary to Section 46 of CEMA, Cap C45, LPN 2004.

Commending the Apapa Area Command and
the FOU Zone ‘A’ for the efforts, Ali said the seizures “demonstrated the NCS’ crucial contributions to national economic and security well-being,” while “the rejection of N150 million bribe presents a picture of a reformed NCS, which operatives are increasingly putting national interest above selves.”

According to him, the feat was achieved “through vigilance and intelligence gathering within the system, as well as information from the National Agency for Food and Drug Administration and Control (NAFDAC).

Photo Caption: Comptroller-General of Customs, Col. Hameed Ali (rtd) (second right) with the other customs officials displaying some packets of the seized tramadol