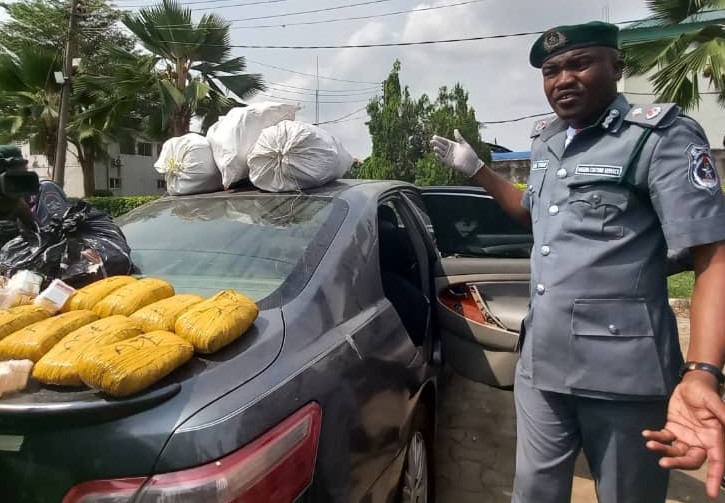 Contrabands with duty paid value (DPV) of N1.009 billion, comprising 1010 bags of foreign parboiled rice and 376.4kg of Pangolin scales, among others, were intercepted in November 2022 by the Comptroller-General of Customs (CGC) Strike Force Team A of the Nigeria Customs Service (NCS).

Coordinator of CGC Strike Force Team A, Mohammed Sani Yusuf, who showcased the items to newsmen in Lagos Wednesday, listed the others as 100 cartons of red wine, 40kg Indian hemp, 58 bales of used clothing, and 35 jerry cans of 25-litre PMS.

He disclosed that the unit also collected N537.91 million within the period from demand notices on undervaluation, underpayments and wrong classification.

Warning against the poaching of Pangolin, Yusuf reminded the smugglers that under the 2016 Convention on International Trade in Endangered Species (CITES) in South Africa, which is still in force, some species of animal, including pangolin, were conserved from extinction.

Unfortunately, pangolin and the likes have been continued to be exploited till date. He stated: “Campaigns and sensitisation on the poaching of pangolins must be intensified since it plays a dominant role on the ecosystem, thereby protecting the forest from destruction by termites and other insects.

Meanwhile, “in our quest to safeguard our country from the selfish activities of economic saboteurs, collect revenue for the federal government and provide security, we have remained resolute and undeterred at enforcing government’s policies and Customs extant laws.

“In tandem with the support provided by the management of the Service, our strategies are reviewed to defeat smugglers’ game of concealment, false declaration and underpayment, among others, during the yuletide period.

“Seizures displayed reflect officers’ commitment to duty and uncompromising posture in the discharge of our statutory responsibilities, aimed at protecting the national economy and preventing the importation of prohibited and harmful goods.

“Two suspects were arrested in connection with some offences during the period under review, both of whom have been released on administrative bail.”

He added: “Since our resumption till date, we have cumulatively generated N5.3 billion, compared to last year’s revenue of N3.59 billion – an increase of N1.67 billion (32 per cent), through demand notices on underpayment and wrong classification.

“We have also made a good number of seizures with total DPV of N8.5 billion.”