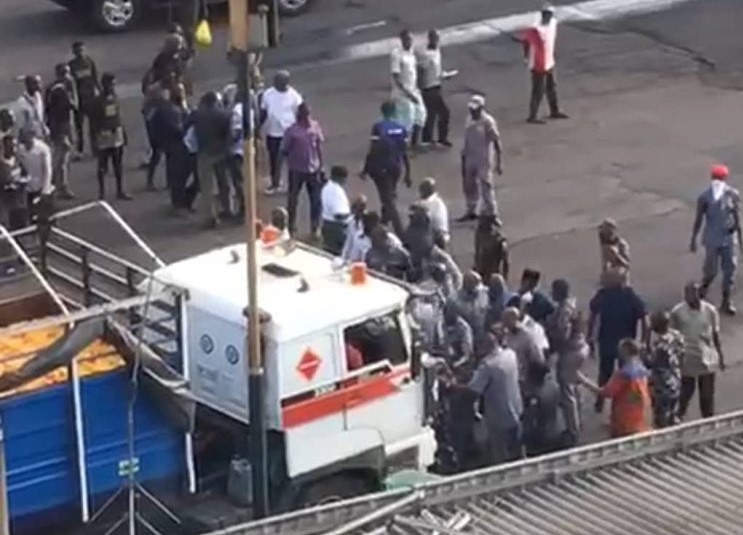 The timely intervention of Compt. Mohammed Abba-Kura of the Apapa Area Command of the Nigeria Customs Service (NCS) averted chaos over the weekend as agents of the Nigerian Ports Authority (NPA) and the NCS refused to yield grounds over clearance documentation.

During the disagreement, which started at about 5.30pm at the Lagos Port Complex (LPC) gate, business activities were disrupted for over an hour as the Customs enforcement agents backed the three trucks conveying relief material but failed to present to the NPA agents the necessary papers for their passage.

The trucks conveying seized vegetable oil, which the Federal Government recently converted to relief materials for the masses, had arrived at the port gate escorted by some soldiers attached to the Federal Ministry of Humanitarian Affairs and Disaster Management, but without the necessary clearance papers.

According to eye witnesses, customs enforcement agents gave an oral explanation to port officials that the items had been duly released by the agency through a Presidential directive, but the port officials insisted on the required documentation.

Piqued by NPA’s resistance, and with the claim that clearance of cargo is customs role, two of the enforcement agents reportedly pulled their guns amidst the ensuing fracas.

As the port officials retreated, one of the trucks exited and sped off, but the NPA officials regrouped, and reinforced by the Port Police, blocked the other two.

Speaking on condition of anonymity, however, a stakeholder blamed the incident on the “total collapse of inter-agency collaboration,” according to online platform, OnePageAfrica, which was at the scene.

“The NPA workers insisted that Customs must produce the papers because the idea of exiting cargo from the port (without due documentation) had become too rampant, and now exacerbated by the anomalies of the Covid-19 modalities.

“The Customs enforcement men got irate and drew their guns because the port officials said the goods would not exit the ports. They (Customs agents) even rough handled the principal manager at the gate, as well as a deputy commissioner of the Port Police, for denying them the right of way.

“Whether seized cargo or not, the right procedure is to notify the agencies of government at the ports, especially the Nigerian Ports Authority, through proper documentation, before exiting the port with cargo.”

The matter was eventually settled by Compt. Abba-Kura and the Nigeria Police, according to the NCS Command Public Relations Officer, Nkeiruka Nwala, who disclosed that the relief materials were for Lagos and Ogun states.

On their part, the NPA General Manager, Corporate and Strategic Communications, Adams Jatto, told The MetroFile that “it was the issue of documentation demanded by NPA officials at the gate, which was amicably resolved.

Suing for peace, he explained that both agencies of government were working to deliver on their mandates at this very trying and difficult period.