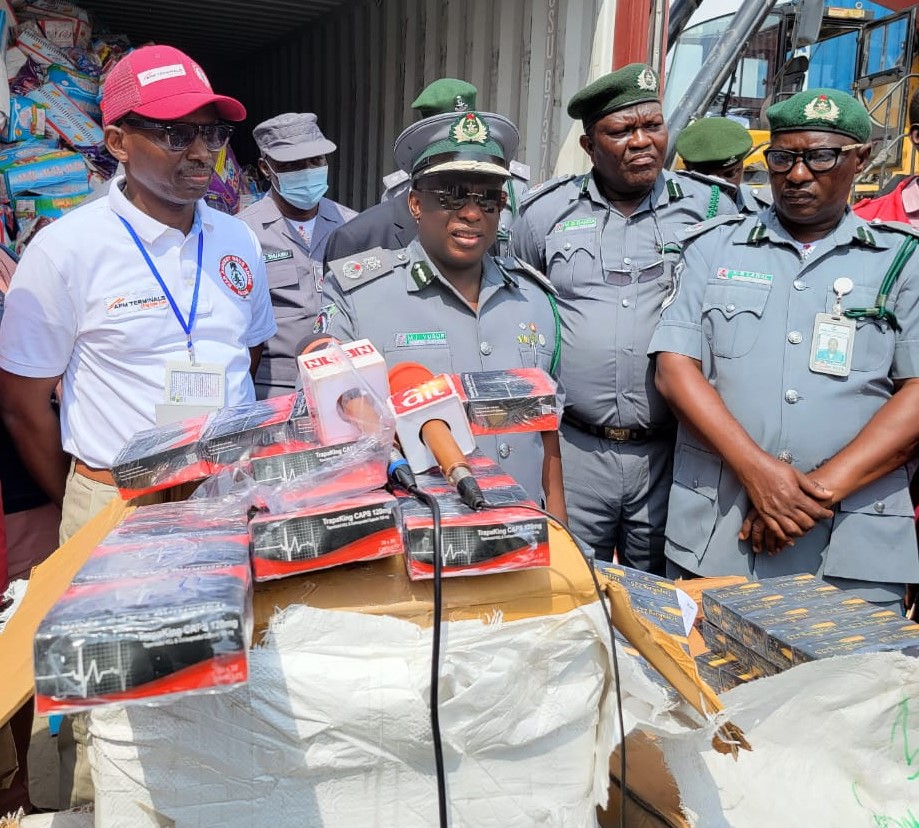 Twenty cartons of tapentadol – a new and more potent variant of tramadol – worth N1.56 billion has been discovered in a 40-foot container of candies by the Apapa Area Command of the Nigeria Customs Service (NCS).

Showcasing the contraband at Classic Bonded Terminal on Ago Palace Way in Lagos Thursday, Compt. Yusuf Malanta said the shipment, arrived the Apapa Port from India on July 3, 2022 was declared as chocolates.

However, it has been under customs’ surveillance since arrival, but the container was discovered during examination to contain cartons of Ok POP sweets, which were used to conceal the 225mg and 120mg tapentadol in 20 cartons.

According to Malanta, “the importer cleverly concealed the drugs at the back of the container just to undermine our officers. We found out that he had 20 cartons of the drugs. Each of the 225mg had 838,500 tablets while the 120mg is 90,10,000 tablets.

“These drugs are deadlier than the normal tramadol. Imagine the havoc it would cause if it had escaped into the market! You will agree with me that most of the criminal actions taking place today in our society is as a result of the consumption of this type of drugs.”

He explained that though the shipment arrived at the mother port since July 3, the importer had been buying time, probably to escape the customs’ watch, “but we are really on top of our game and will continue being on top of our game.

“If he is not tired of importing, we will not be tired of making him lose his investment, and will ensure that he is trailed and brought to book.”

Though no arrest has yet been made, Malanta noted that ongoing investigations have already yielded substantial evidence on suspected importers, as the manifest in e-Customs modernisation, which begins from the port of loading to destination, will show the content of the cargo.

He further commended the collaboration among the relevant agencies, stating that “the cooperation with the NDLEA and other agencies around here has yielded a fruitful result for the command.

“We will continue doing that to ensure that a serene environment is created for compliant traders, and for goods that are in tandem with Customs and Excise Management Act (CEMA). We thank God for giving us the wisdom to track and seize these kinds of drugs because it contravenes section 64, 46 and 47 CEMA Act.”

On his part, the Commander, National Drug Law Enforcement Agency (NDLEA), Apapa, Ishiaku Kwajaffa, said “the 120mg written on the drugs is just a cover-up, the potency of the drugs is three times higher than the normal tramadol. This particular brand is new to us. This is the first time we are coming across the drugs.

“The 20 cartons are worth N1.560 billion. Each carton of tramadol is worth N78 million, but we have made it so scarce for them.”