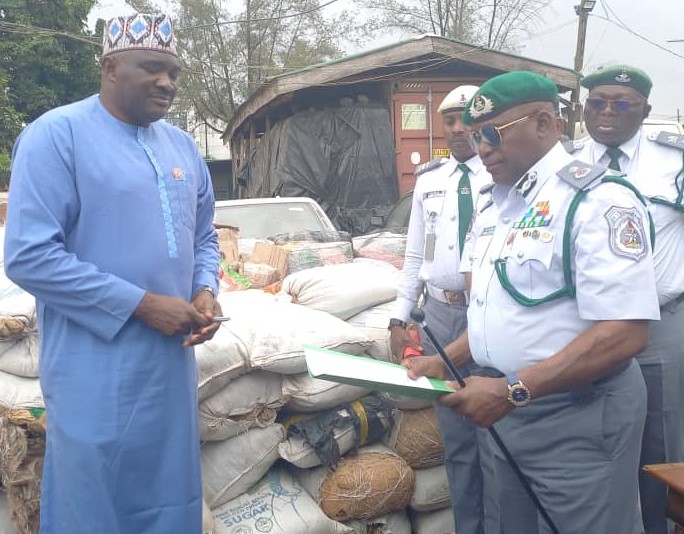 It was another successful anti-smuggling campaign against illicit drugs as the Federal Operations Unit (FOU), Zone A of the Nigeria Customs Service (NCS) Thursday handed over a total of 3,851kg Indian Hemp worth N308 million to the National Drugs Law Enforcement Agency (NDLEA).

Addressing newsmen during the handover of the drug ((also called Cannabis Sativa), Ag. Compt. Hussein Ejibunu said that two suspects, Ebuka Mbamalu and Iruka Chita, were also arrested along Ogere-Ilaro Expressway in connection with the seizure.

According to him, the two suspects have, however, been handed over to the NDLEA for further investigations and prosecution for being in possession of 627.0kg and 80 parcels of Cannabis Sativa respectively.

While handing them over, Ejibunu stressed the importance of synergy, which has been in existence between the Customs and the NDLEA, stating: “As a nation, it is our responsibility to ensure the security of lives and property and to ensure that illicit items do not find their way into the country.

“Cannabis Sativa is a substance that is widely used by criminals, kidnappers, bandits and even Boko Haram. They use this substance to charge up in a way to allow them carry out dastard acts.

On his part, the NDLEA State Commander, Mr. Callys Alumona, appreciated the collaboration between the NCS and the NDLEA.

Alumina, who was represented by the Deputy Commander, Operations and Intelligence, Lagos State Command, NDLEA, Mr. Augustine Yusuf, said the synergy between the two agencies will stop illegal cross-border trade and importation of illicit drugs.

“Our motive and action have been so clear and it is to let everyone say no to drugs, and we have been doing our best by enlightening the public, which is evident under the leadership of the current chairman of NDLEA to intensify drug abuse control.

“We have put in place a grand strategy which is called, War Against Drug Abuse (WADA), and we are taking it to the grassroots so that more people will be enlightened to make the right choices in their lives.”

He added: “The Nigeria Customs Service has been wonderful. They have been part of us since creation and have been there as a big brother figure to us all the way. For the suspects, we will conduct investigation and those who made the arrest will avail us useful information for possible prosecution.”