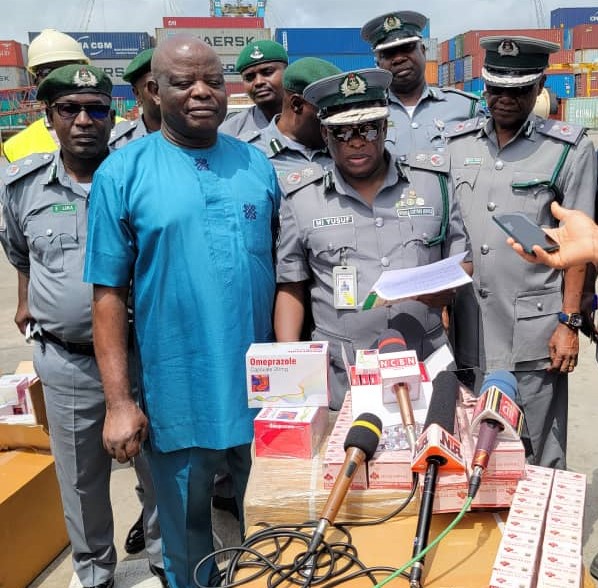 A few days after its recent seizure and handover of the banned drug, tramadol, the Apapa Area Command of the Nigeria Customs Service (NCS) has intercepted another 20ft container laden with 55 cartons of tramadol.

The content, which was declared in the manifest as 272 cartons of stainless steel pot, were discovered when positioned for examination on July 21, 2022 to rather contain tramadol concealed in food flasks.

Disclosing this to newsmen during a briefing Thursday, Compt. Malanta Yusuf said that each carton contained 50 rolls of 10 packs of the contraband, with each pack also containing 10 sachets.

“For the avoidance of doubt, our action of impounding this container is in line with the provisions of sections 46 and 47 of the Customs and Excise Management Act (CEMA) Cap 45, Laws of the Federation of Nigeria 2004,” Yusuf explained.

He called on all stakeholders in the trade supply value chain to “always abide by the extant rules,” while reiterating the command’s “resilience in ensuring that the importation of such illicit hard drugs are detected, seized and handed over to the appropriate agency for further regulatory action.”

He further advised importers and agents to acquaint themselves with import/export prohibition guidelines to safeguard the nation’s economy and security.