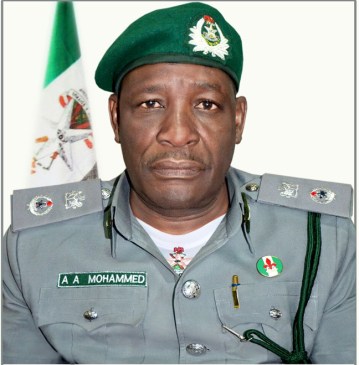 In a damning statistics that indicate smugglers’ resolve on continued sabotage of the economy, a total of 58 assorted vehicles, 39,664 bags of 50kg rice and others with an approximate Duty Paid Value (DPV) of N5.1 billion were intercepted by the Customs Federal Operations Unit (FOU) Zone ‘A’ in just four months.

The seizures, made between August 17 and December 10, 2018 included 58 vehicles, mainly smuggled in across the land borders (comprising 34 exotic brands still under detention and 24 others already seized, as well as 39,664 bags (66 trailers) of 50kg foreign parboiled rice.

Displaying some of the items before newsmen in Lagos Tuesday while reviewing the unit’s performance in the past four months, Compt. Mohammed Aliyu of the FOU ‘A’, Nigeria Customs Service (NCS), restated their determination to succeed at all cost as the nation’s second layer of defence.

He said they would aggressively enforce government’s policy on self-sufficiency in food production by thwarting unauthorized importation, particularly rice, to help actualise the nation’s economic recovery plan, strengthen national security and ameliorate the potential health hazards and negative impacts of smuggled items on the average Nigerian.

To succeed in this task, he urged all stakeholders to comply with all clearance procedures and extant laws. Lamenting the dire consequences of the illicit substances being intercepted, including the recent successive seizures of tramadol and other regulated drugs at different ports in the country, Aliyu warned that no one knows the potential victims.

Nevertheless, the unit’s “greatest New Year gift to citizens,” as part of its contributions to the health, security and economic well-being of the nation is the modest sacrifice by its officers and men, some of who lose their lives while some get injured combating the smuggling of these illicit substances to protect the future of Nigeria’s endangered youths, he said