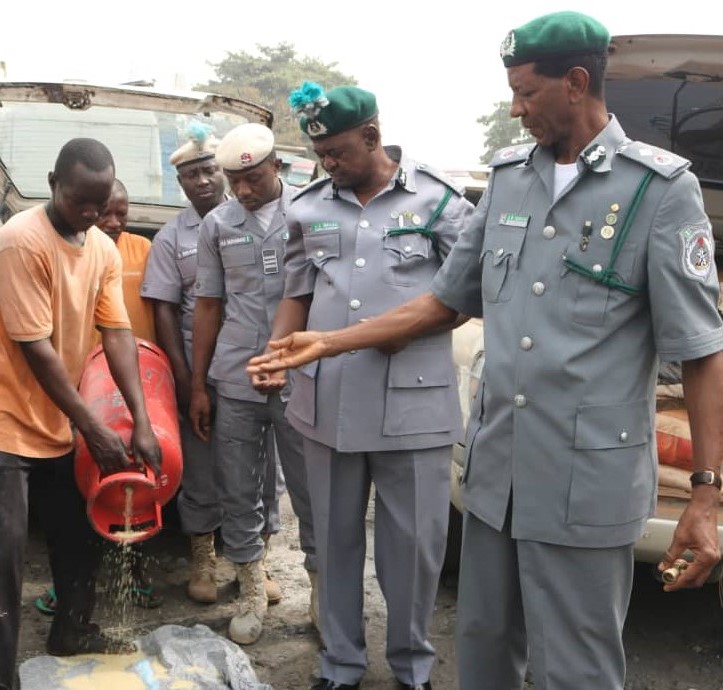 Ag. Comptroller Yahaya and others watch the dangerous trend in dismay as rice was being emptied out of a gas cylinder

The Federal Operations Unit (FOU) Zone ‘A’ of the Nigeria Customs Service (NCS) has intercepted 1,393 bags of smuggled foreign parboiled rice, some of which were in gas cylinders, and other items with a cumulative Duty Paid Value (DPV) of N40.14 million.

Others included 187 jerrycans and 66 drums of foreign vegetable oil, as well as 625 cartons of poultry products – all brought in through illegal routes in Ogun State between February 5 and 17, 2020.

Intercepted based on surveillance and routine patrol, the rice has DPV of N27.9 million, N6.3 million worth of vegetable oil, and N6 million worth of frozen poultry foods – all conveyed in 12 vehicles, in which some rice was concealed in gas cylinders.

The seizures, coming barely two weeks after the command also showcased various seizures worth over N10 billion, including pangolin scale, show an increasing desperation among the smugglers as they run out of options following the continued land border closure and the commitment of officers.

Concerned at the continuous use of hazardous tools as means of conveyance of contraband foods, Ag. Comptroller Usman Yahaya has warned economic saboteurs to stop their unscrupulous activities or continue to count losses.

Yahaya also advised legitimate traders to adhere to honest declarations, assuring that the FOU was ever ready to facilitate trade in line with global best practices, according to a statement by the Command Public Relations Officer, Mr. Jerry Attah.

He further appealed to all well-meaning Nigerians to support the agency’s fight against smuggling by availing it useful intelligence on all illegal trades across the borders.

In another development, a team of customs personnel from Ogun I Command, backed by Nigerian Army patrol personnel, were attacked by some smugglers on Monday as they made to evacuate a secrete stockpile of rice and other contraband items following credible intelligence.

According to the Public Relations Officer, Ogun State 1 Area Command, Abdullahi Maiwada, the team had arrived the scene at Obada-Idiemi, along Imeko-Afon in Ogun State at about 2.30am, and as they made to evacuate the items, “some daredevil criminals shot sporadically at them.

“In the melee that ensued, one patriotic youth who was assisting the team in evacuating the items was hit by a stray bullet and was immediately rushed to the hospital, where he was currently receiving medical attention.

“Two official vehicles attached to the Nigerian Army and the Nigeria Customs Service respectively were equally pelted with bullets.”

However, the team repelled the aggressors and successfully evacuated 110x50kg bags of parboiled rice, just as they arrested a suspect in connection with the incident.