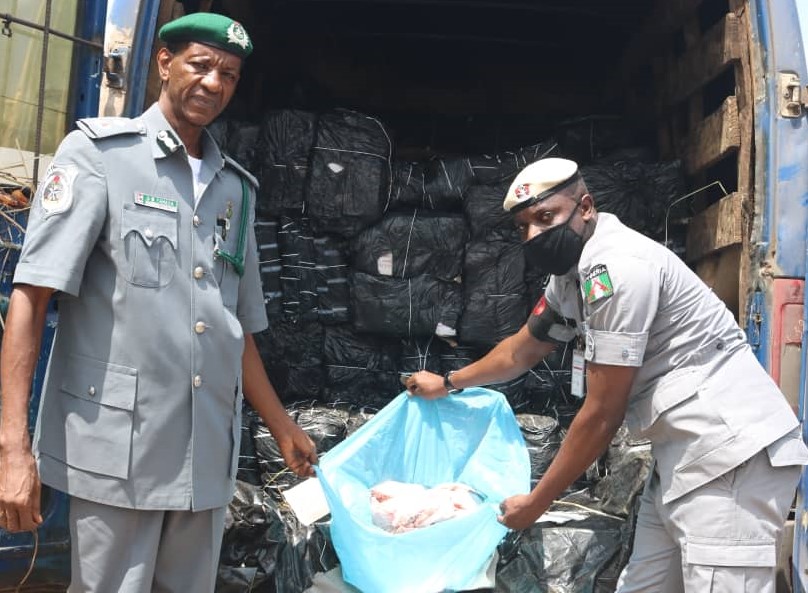 A vehicle bearing Covid-19 sticker and supposedly for the anti-pandemic campaign has been arrested by the Federal Operations Unit (FOU) Zone A of the Nigeria Customs Service (NCS) while smuggling frozen chicken into the country.

The FOU Area Controller, Usman Yahaya, said the vehicle was intercepted by eagle-eyed officers on routine patrol along the Ijebu Ode Expressway in Ogun State on its way from Benin Republic following an information.

Yahaya disclosed that the vehicle, supposedly on essential duty, was carrying cartons of smuggled frozen chicken from outside the country, according a statement by the Public Relations Officer, Jerry Attah.

“The officers were professional enough to intercept the vehicle, which was believed to be used in the movement of essential commodities, but were surprised to see that it was being used for illegal activities, such as movement of contraband,” he said.

“We have arrested the vehicle and investigation has commenced to get to the root and unravel other atrocities that may have been committed using the essential duty tag.”

Meanwhile, Yahaya revealed that the command intercepted contraband worth approximately N13 billion between January and April 2020.

It also paid N1.14 billion into the Federal Government’s Treasury Single Account (TSA) from Debit Note (DN) on intercepted containers from Lagos seaport, voluntary payment of duty on vehicles and the auctioning of Premium Motor Spirit (PMS), among others

Yahaya assured that the command would sustain its anti-smuggling efforts, especially now that government is preaching diversification into agric, as the falling price of crude has seriously affected government’s revenue base.

“So, we will ensure that smuggling is reduced to the barest minimum, and not allow it to fester to avoid worse injuries to our economy and wellbeing.”