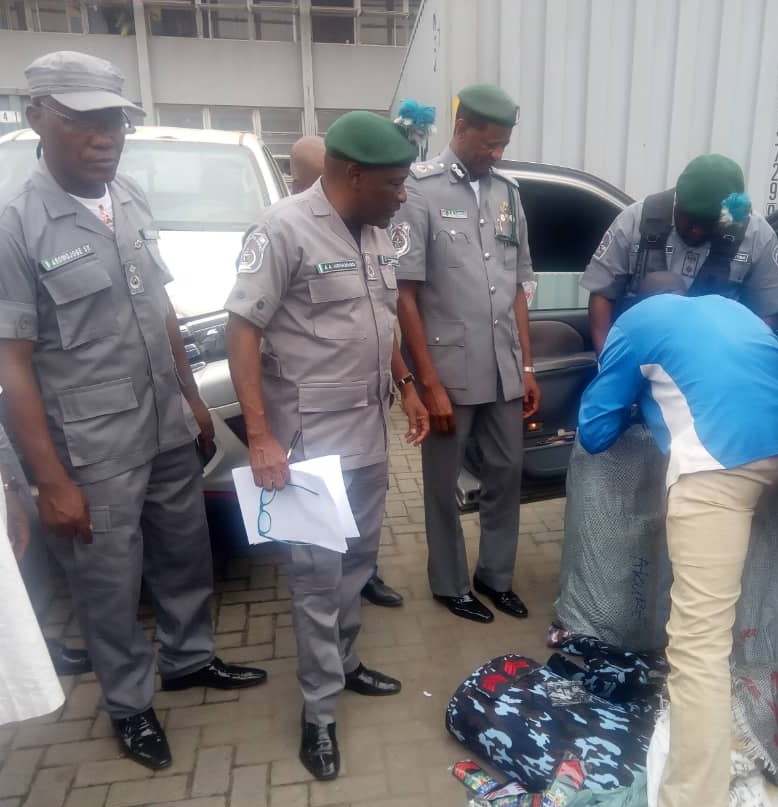 Bales of police uniform, ranks, tear gas canisters and other paraphernalia of the Nigeria Police Force (NPL), obviously intended for criminal purposes, have been intercepted by the Federal Operations Unit (FOU) Zone A of the Nigeria Customs Service (NCS).

Comptroller Muhammed Aliyu disclosed that a suspect has already been arrested in connection of the seizure, adding that Toyota Sienna space bus, in which the items were concealed, was intercepted on its way out of Lagos.

He described the uniforms, which included ranks, belts, berets and police badges with identity cards, as threat to national security, as they were destined for wrong hands, “because the uniform can be used for kidnapping, Boko Haram or election criminalities, but generally, it threatens national security.

“We have the ranks of sergents, inspectors, belt and badges on the ranks. You can see that the identity cards have no name on them. They are only printed and later they will be affixed with any name they want.”

He said the service would ensure that such offensive goods are never allowed into the country. According to him, “they were intercepted along the highway and what we know is that it was caught on Lagos road enroute another state.

“The seizure is of great concern because it concerns national security. The quantity alone is not the concern but the havoc it would cause. For instance, one bundle of this uniform can accommodate about 10 persons and Nigerians will complain about the atrocities of the police, not knowing they are not real police but impostors.

“Not only the identity cards and ranks were intercepted but also cutlasses. What will a supposed police do with cutlass? Have you ever seen a genuine policeman with cutlass? These are part of the atrocities they will use the uniform to commit.”

On the possibility of some of the items already evading the attention of the service, Muhammed said the agency knows how to recover the remaining, if any He explained further: “There are certain issues we don’t need to tell the press. We strategise our operations and when I get more, I will call you because if I disclose our strategies now, they will become aware.”

He warned those involved in such unwholesome practices to stop it and also destroy the one they have in stock “because we are coming for them.”