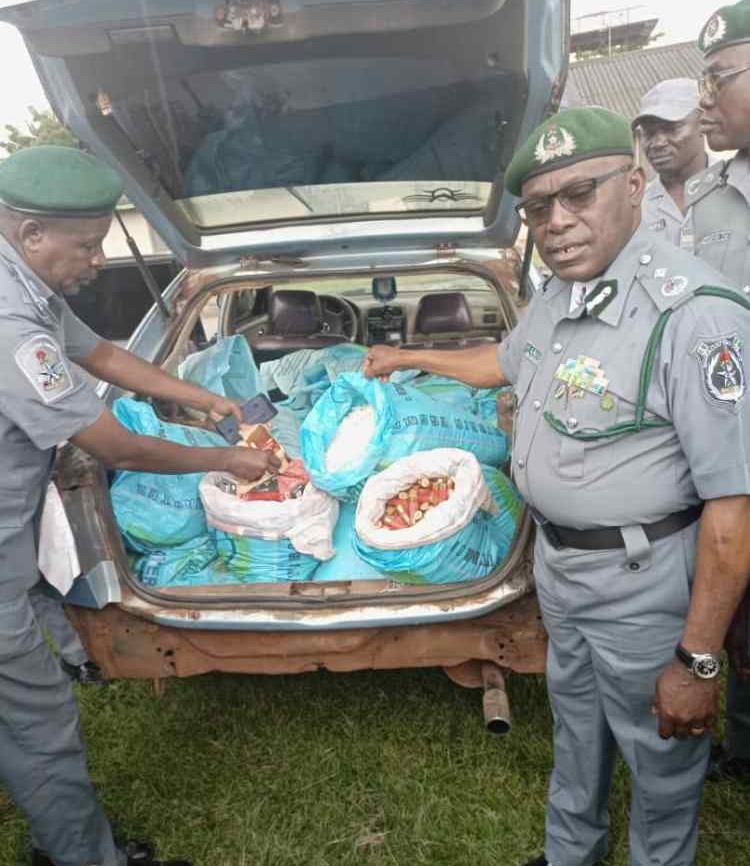 A cache of ammunition and machetes being smuggled into the country from Benin Republic have been intercepted by the Federal Operations Unit (FOU) Zone ‘A’ of the Nigeria Customs Service, head of the unit, Ag. Compt. Hussein Ejibunu, said.

Ejibunu told newsmen in Lagos Friday that 752 pieces of AAA cartridges (70mm) were discovered neatly concealed in cassava flour when the smugglers were intercepted at Igbo-Ora, Oyo State.

Also intercepted heading into the country were 1,260 cutlasses and 621 cartons of expired drugs, while 856 jerrycans of Premium Motor Spirit (PMS) were outbound.

According to Ejibunu, the officers were at a pin-down point outside Iseyin when they sighted a vehicle carrying bags of rice covered with cassava flour, but the smugglers abandoned their vehicle and fled into the forest on seeing the customs agents.

“When search was carried out on the vehicle, it was discovered that 752 pieces of live AAA cartridges (70mm) were carefully concealed with cassava flour,” he said.

He noted that in the past three weeks, the unit has recorded 28 seizures of smuggled items, including 8,000 bags of 50kg foreign parboiled rice, 1,419 jerrycans of vegetable oil, 1,301 bales and 128 sacks of secondhand clothing, 233 bundles of wrapper, 621 cartons of expired medicaments, 635 cartons of wine and 1,046 pieces of used tyres.

These, according to him, were intercepted at different flashpoints in the zone, including Ado-Odo, Idogo, Sokoto-Ijoun, Ohunbe, Ilaro, Atan, Abeokuta/Sagamu Interchange, Gbaji, Agbara and Ijebu-Ode in Ogun State, as well as Iseyin, Igbo-Ora and Igbeti in Oyo State.

He expressed concern that a new disturbing trend of smuggling was being deployed “with the massive use of motorcycles to smuggle 50kg parboiled rice, each using bush paths not accessible to vehicles. Cumulative seizure of such means of conveyance is over 100 units in our custody.

“Another challenge that has remained unabated is the issue of ambush and unprovoked attack of officers. Just on Saturday, October 16, 2021, my patrol team ran into a convoy of over 24 vehicles laden with smuggled rice and was able to intercept 12 along Abeokuta/Sagamu Interchange.

“As the officers made their way to Lagos, over 300 smugglers and hoodlums had mobilised and attacked the officers with pump-action rifles and cutlasses, pebbles and bottles. In the process, the patrol vehicle was riddled with bullets while the windscreen was shattered.

“The aftermath was the forceful retrieval of eight of the 12 intercepted vehicles and injury to two officers. You can now see what we face every other day.

“One thing is very certain, we remain undaunted in the pursuit of our mandate, no matter the level of attacks on my men on the field. Let me warn smugglers that no man has the monopoly of violence.

“We have the backing of the law to bear arms, and to that extent, we will not hesitate to deploy the rules of engagement in such dangerous circumstances, hence parents should warn their wards on the dangers of smuggling.”