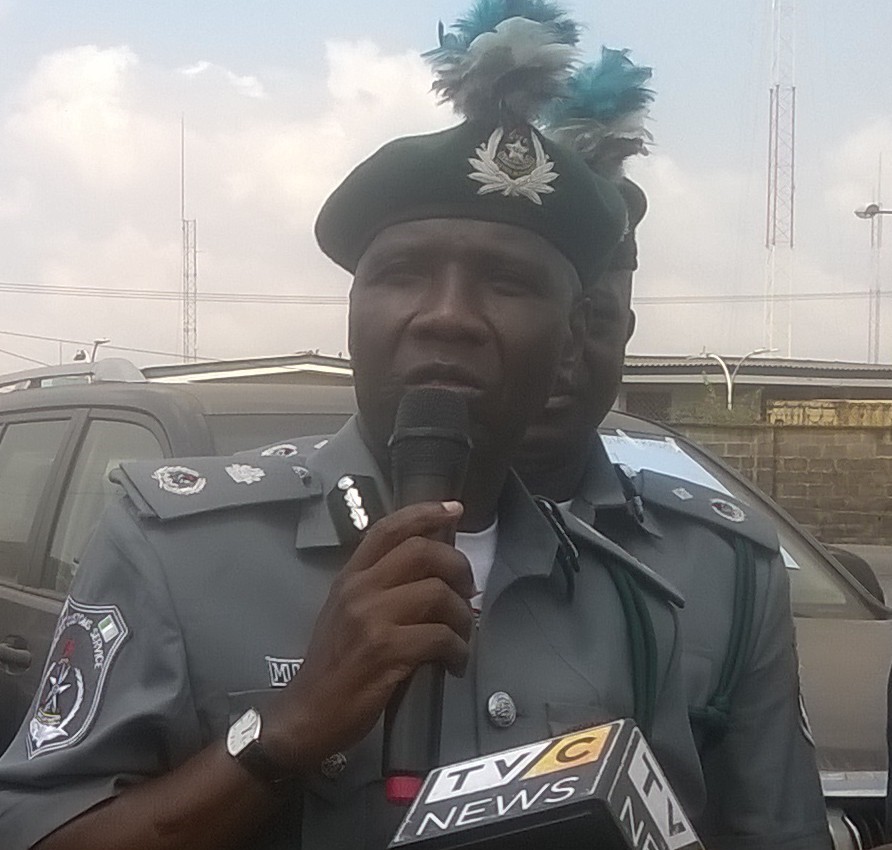 Comptroller Garba Resolved to keep ahead of the new smuggling tactics, the Federal Operations Unit (FOU) Zone ‘A,’ Lagos of the Nigeria Customs Service (NCS), led by Comptroller Mohammed Uba Garba, intercepted a total of 185 assorted items with Duty Paid Value (DPV) of N1,595,141,144.81 from November 1 to 30, 2017. It also arrested five suspects in connection with the seized items and recovered N108.3 million from the under-valued items, bringing the total to N1,703,447,163.06, all through intensified anti-smuggling operations. The items, many of which have been forfeited to the Federal Government over duty evasion, falsification and concealment, included 64 assorted vehicles (mostly brand new), 13,333 bags of foreign parboiled rice (about 22 trailers), with DPV of N164,449,888.65, and 1,390 cartons of frozen poultry products. There were also 835 Jerry cans of vegetable oil, 15 parcels of Indian Hemp, 1,101 pieces of used tyres, and 205 bales of used clothing. Addressing newsmen at their unveiling at the FOU Command, Ikeja, Wednesday, Comptroller Garba disclosed that the vehicles alone have a combined DPV of N1.302 billion and included two Lexus Jeep (bullet proof) and one Toyota Land Cruiser (bullet proof). The rest were nine Toyota Hilux van, eight Toyota Hiace Bus, 26 Toyota Corolla, nine Land Cruiser Jeep, five Toyota Camry, one Land Rover Jeep, one Nissan Sentra, one Pajero Jeep (all 2017 models), one Sienna (2015) and one Lexus RX 350, among others. According to Garba, while 57 of the vehicles were evacuated along Omole Estate, Ojodu, and Olayiwole Close, Lekki Phase 1, the remaining seven were intercepted along Ijebu Ode Expressway and Olorunda, and had no papers. Indicating that they were smuggled vehicles, the FOU Comptroller said: “As I speak with you, nobody has come forward to claim ownership yet because we doubt if they have any customs papers for the vehicles, not to mention End-User Certificate for the bullet-proof (vehicles). “Our legal unit has already been mandated to investigate it and as soon as we get any headway about the owners or their agents, we will let the public know.” Garba further disclosed that 17/20ft containers of wood, suspected of not meeting the required guidelines for export, were also being detained, while a 20ft container with 385 cartons of Tiffany Crunch n’ Cream biscuit, 2,300 cartons of Tiffany chocolate and Toffee Sweet declared as engine block have equally been seized. Meanwhile, worried that rice smugglers have resorted to using bags for the locally produced rice to re-bag the foreign rice, some of which were also intercepted, Garba has urged the perpetrators of the act to rather support local production in the interest of the nation than enriching unknown foreigners.
Post Views: 1,018