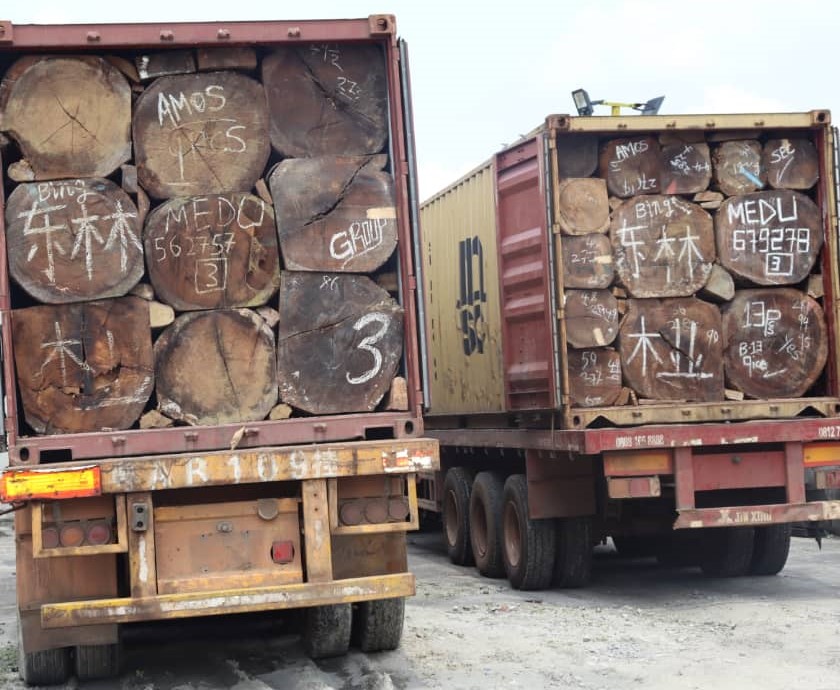 The Federal Operations Unit (FOU) Zone ‘C’ of the Nigeria Customs Service (NCS) has intercepted three trucks with six 20ft containers of unprocessed timber in Port Harcourt and arrested two suspects in connection with the seizure.

Kayode explained that deforestation comes with negative effects such as desert encroachment and environmental degradation, adding that if tree felling is not checkmated, the ecosystem and its biodiversity would suffer.

He decried the nation’s economic losses from the export of unprocessed logs, noting that employment creation, which results from local processing of the logs, is vital for the country’s teeming youth.

Kayode further commended Compt. Yusuf Lawal and other officers of the unit for their resilience, doggedness and steadfastness in tackling smuggling, and cautioned against senseless attacks on the operatives in the course of their legitimate duties.

According to him, “on July 16, 2021 at about 2.00pm, one of the surveillance teams of FOU Zone ‘C’, acting on credible intelligence, trailed and intercepted three trucks conveying 6×20ft containers of logs of rough timber along industrial road, Port-Harcourt.

“We also arrested two suspected smugglers who were attempting to export the unprocessed logs, but they have been released on administrative bail.

“Exportation of rough timber, which contravenes schedule 6 of the extant CET, comes with negative economic and environmental effects and must not be condoned.”

“NEPC is an agency of government which takes note of products that are meant for exportation so that the proceeds can be repatriated accordingly,” he explained.

“Unfortunately, NEPC is not aware of these logs and have not issued any Nigeria Export Proceeds form, further confirming therefore, that the logs were about to be smuggled out.”

However, he urged Nigerians to assist the agency with relevant information to aid its activities for the general good of the country.