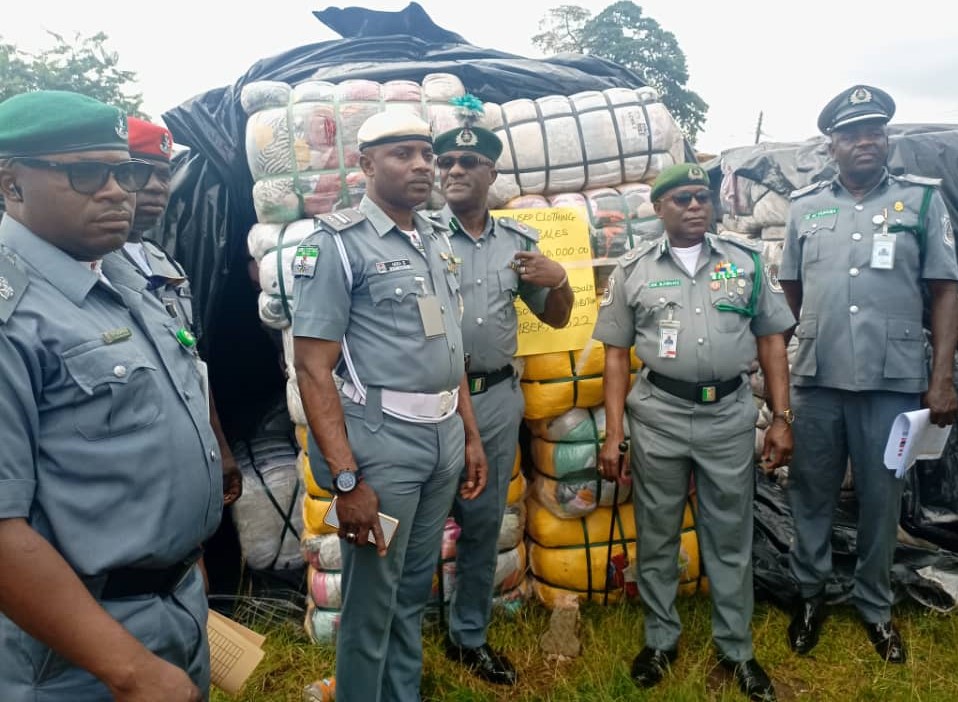 A massive haul of 1955 bales of used clothing was discovered and evacuated by the Federal Operations Unit (FOU) Zone ‘A’ of the Nigeria Customs Service (NCS) around the International Trade Fair Complex, Mile 2-Badagry Expressway in Lagos.

Disclosing this to newsmen during his briefing on the unit’s anti-smuggling operations in September, Ag. Compt. Hussein Ejibunu said the used clothing were capable of transmitting the deadly Monkey Pox and other skin infections, beside economic sabotage.

He disclosed that five suspects were arrested in connection with some of the seizures, just as the Federal High Court convicted six persons in three criminal cases over possession of smuggled goods, while six civil suits against the unit were dismissed for lacking merit.

The total Duty Paid Value (DPV) for the seizures made within the month was N622.4 million, while the sum of N107.8 million was recovered through Debit Notes on under-payments and under-declarations.

According to Ejibunu, chief among the seizures in September was the 1,955 bales of used clothing, which were discovered and evacuated “on the strength of combined strategies of intelligence, tact and enforcement.

Referring to the clothes, he said it was “the highest single seizure of used clothing made by the service this year, and we have commenced investigations to know those behind this massive importation, and at what entry point these clothes came into the country.

“Used clothing in commercial quantity falls under absolute prohibition. They have been seized and we are on the trail of the smugglers. Smuggling of used clothes has economic and health implications on our people.

“The government in its wisdom wants the local textile industry to enjoy protection and create more jobs for Nigerians from the cotton farms, through the textile and garment factories, to our markets.

“The very serious health implication of this act of textile smuggling is exposure of users to skin diseases like scabies and fungal diseases, which can be transmitted by wearing unwashed second-hand clothes.

“This is coming at a time the world is wary of monkey pox, which mode of transmission includes clothing. According to a World Health Organisation fact-sheet, Monkey pox is transmitted to humans through close contact with an infected person or animal, or with material contaminated with the virus.

“Monkey pox virus is transmitted from one person to another by close contact with lesions, body fluids, respiratory droplets and contaminated materials, such as beddings.

“It is a viral zoonotic disease that occurs primarily in tropical rainforest areas of West and Central Africa and is occasionally exported to other regions.”

Also, “for the seized petroleum products, we have got them safely disposed due to their volatile nature. I want to advise patriotic members of border-communities through which petrol is smuggled, to report to us for timely interception, seizure and arrests.”

He noted that such quantity These quantities of petroleum products in the hands of smugglers could burn down communities and endanger lives and property in the event of fire. We are aware that smugglers’ desperation rises towards the yuletide.

“In view of this, we are strategising ahead of them, not only to seize their wares but also to arrest and make them face prosecution. Presently, there is full deployment of our manpower and logistics to achieve our goals.”