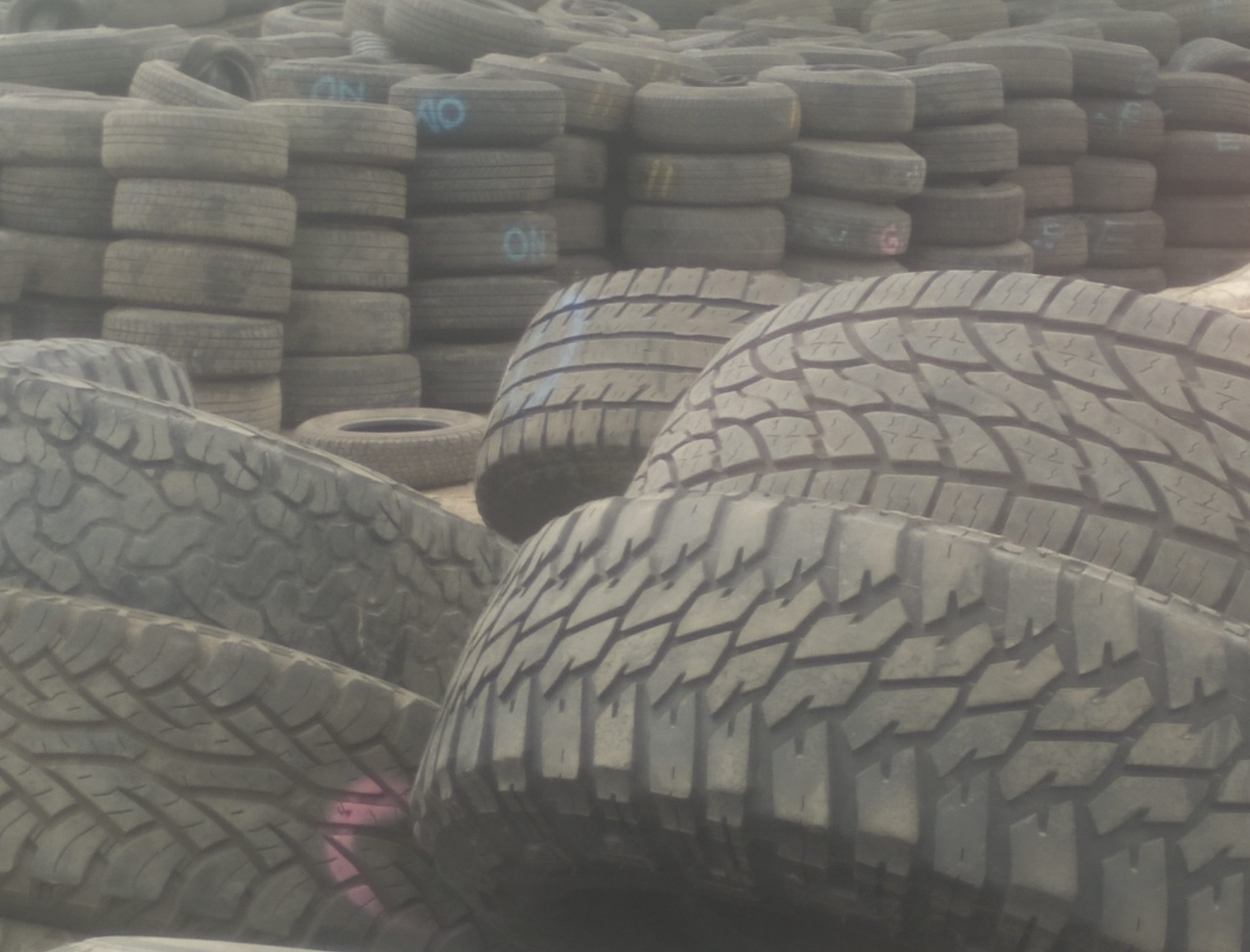 The Federal Operations Unit (FOU) Zone ‘A’ of the Nigeria Customs service (NCS) over the weekend swooped on a massive stockpile of recently imported used tyres at a location off the Redeemed Christian Church of God in Mowe, Ogun State.

So massive in quantity and arranged in different batches that it would require many trailers to evacuate and obviously give the agency space problem for storage, the contraband also includes old, worn-out tyres that could pass for Nigeria-used – all in the premises that look so unsuspecting in spite of being along the expressway.

Addressing newsmen at the venue, Ag. Compt. Hussein Ejibunu said the unit got an intelligence on the stockpile, adding: “You can see they are being packed in sizes; each size has one or two tucked into one. Used tyres fall under import prohibition list that should not be imported Nigeria.”

Shocked at the possible use of such huge stock, Ejibunu said it could serve a twin purpose, but “investigation will reveal whether they will retread and sell them as new because for someone to have this quantity kept in a discrete place like this has left much to be desired.

“It is important to let us know that smugglers are into different businesses in different facets. For someone to have these quantities, obviously it could not go to the market, it could be retreaded, but investigation will reveal that.

“Equally, down there, there are few bales of used clothing, obviously to be ferried somewhere in Nigeria. It is heartrending to see that some unscrupulous Nigerians want to turn Nigeria into dumping ground. It is not good for our economy and it is not good for our health.”

However, he restated the resolve to reduce smuggling to the minimum, saying: “We as agencies of government are resolute and determined to fight this scourge of smuggling. Some credible intelligence led us to unravel this. This area is some kilometers from the Redeemed Christian Church of God along the Lagos Ibadan Expressway at Mowe.”

Though no arrest has yet been made, he assured the unit will get the details of a container laden with brand new tyres, which was still in the premises, “and through this container we will link the owner of this place.”

On the possibility of the tyres being recycled to produce plastics, he said investigation will reveal because, “even if they do, it must be within the ambit of the law. These tyres were not manufactured in Nigeria, they are foreign-used, so they are prohibited in the first instance.

“Smugglers have so many ways and are into so many things, and they think maybe virtually every second to beat government agencies, that is their target. I cannot imagine that someone could think and have used tyres of this quantity. I have never seen this type of quantity before.

“We have started evacuation. Investigation will reveal if it is concealment. They could put those things inside containers, put cars and other things and cover it. It could even be inside the new tyres. Smugglers are into so many tricks but we will take this container to the office, trace the movement, then know the linkage.”

Ejibunu assured that the used tyres would be destroyed eventually but only after the due processes and procedures, adding: “We have agencies that are saddled with that responsibility of ensuring that government seizures are appropriately discarded through condemnation.

“After the expiration of 30 days, without anybody coming for it, we will compile it for seizures, and then to court for appropriate condemnation.”

He urged Nigerians not to turn the country into a dumping ground. According to him, “anybody who has money to buy a car should be able to buy good (brand new) tyres because it is far more expensive to buy a car than brand new tyres.

“For car owners to stay alive, I will enjoin Nigerians to stop patronising used tyres.”