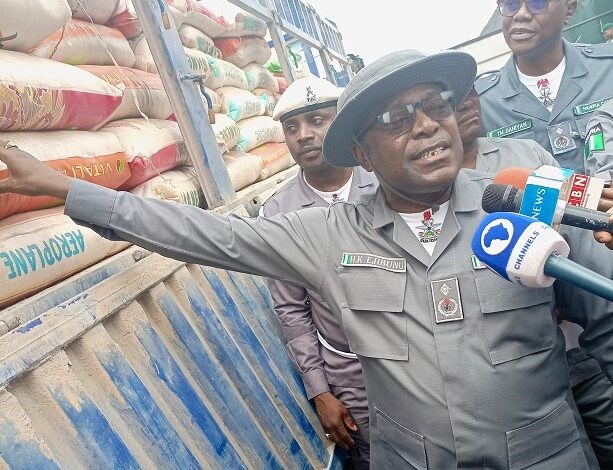 Various contraband items, including 65 used vehicles and 77 trailer-loads of foreign parboiled rice, worth a total of N7.1 billion were intercepted by the Nigeria Customs Service (NCS) Federal Operations Unit (FOU) Zone ‘A’, Ikeja between January and June 2022.

Ag. Controller of FOU ‘A’, Deputy Compt. Hussein Kehinde Ejibunu, who disclosed this in Lagos Monday during his news briefing on the unit’s half-year activities, stated that 103 suspects were also arrested in connection with the smuggled items.

“Goods seized within the first six months of the year are worth a cumulative duty paid value of N7.1 billion. These seizures were made for contravention of different Customs Acts,” he stated. Also, “the sum of N577. 9 million was collected as revenue from underpayments.”

Worried at the continued activities of economic saboteurs, Ejibunu restated the unit’s determination to continually frustrate illicit trade within the zone by seizing smuggled items and arresting suspects.

He condemned the importation and consumption of hard drugs, which he linked to the growing heinous crimes in the society, and urged Nigerians to beware of such illicit importation as the 2023 elections approach.

Meanwhile, Ejibunu disclosed that the unit was in the process of providing additional storage space for seizures, having requested increased Authority to Incur Expenses (AIE).

While commending the NCS leadership for supporting the unit with logistics and other forms of motivation, Ejibunu also commended “personnel’s professionalism in compliance with the extant regulations.”

According to him, “successes recorded in the anti-smuggling drives are products of sustained vigilance and intelligence deployment within the ports and border corridors.

“On the whole, the entire success of the unit is premised on the improved logistics supplied by the management of the Service Headquarters, collaboration with sister-security agencies, esteemed stakeholders, as well as patriotic citizens who provided useful and timely information.

“Let me use this medium to remind the business community that though some of the land borders were reopened, it is worthy of note that they were reopened for legitimate business.

“Agents and the general public are enjoined to be acquainted with the Federal Government’s fiscal policies, customs extant regulations as well as the import and export prohibition lists for proper guidance.

“We shall continue to facilitate legitimate and compliant traders to grow our local economy, while we sustain deliberate efforts aimed at frustrating recalcitrant traders, as seen in the volume of seizures displayed.”