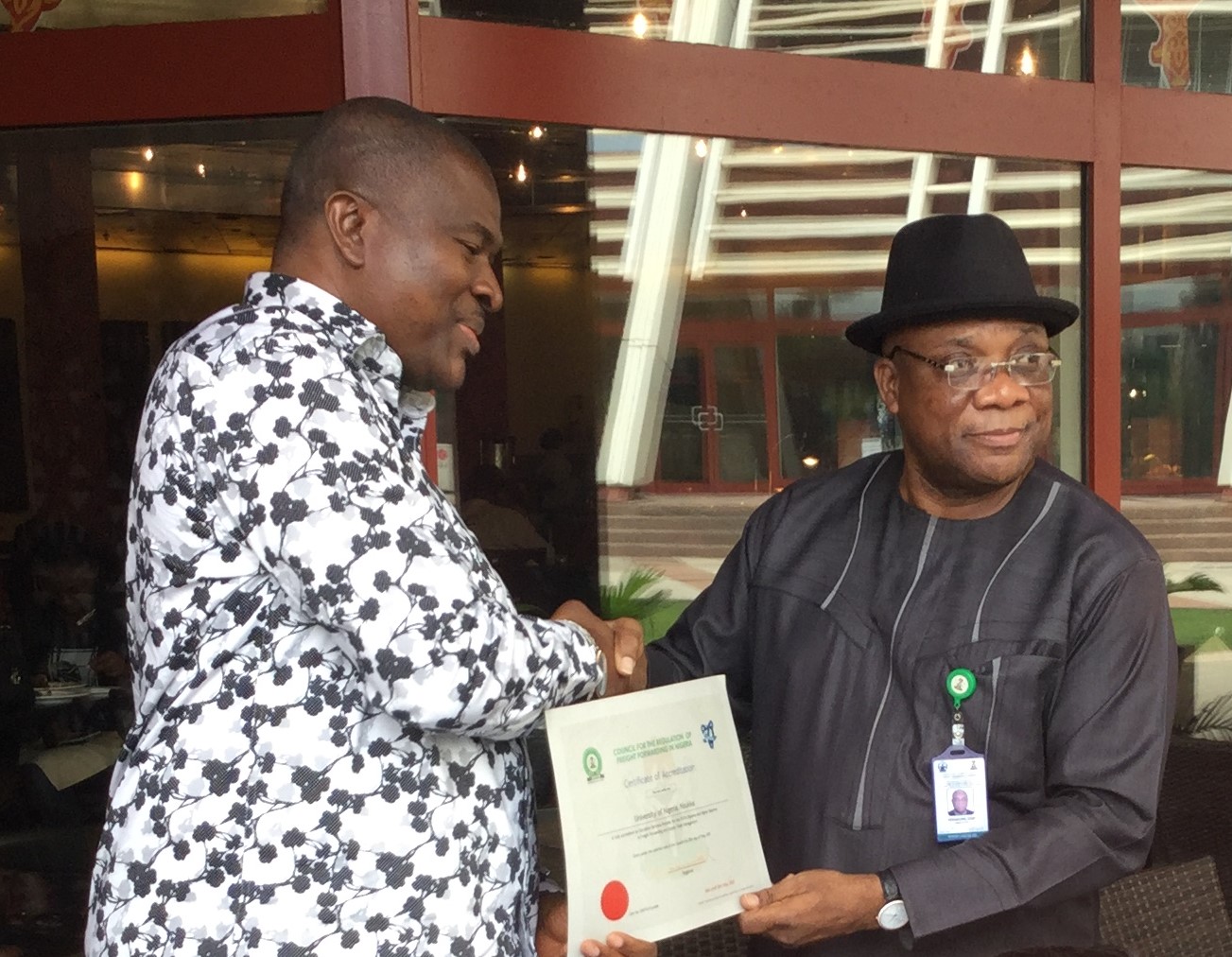 CRFFN Registrar, Samuel Nwakohu (right), with the representative of UNN Vice Chancellor and Coordinator of the Centre, Prof. Fab Onah, after the signing of the Memorandum of Understanding…recently

Towards making Nigeria a training hub, the Council for the Regulation of Freight Forwarding in Nigeria (CRFFN) is partnering the University of Nigeria, Nsukka (UNN) as an accredited education services provider for professional qualifications in freight forwarding and supply chain management.

During the signing of the Memorandum of Understanding with UNN in Abuja, CRFFN Registrar, Mr. Samuel Nwakohu, said the move was in fulfilment of Section 15 of the CRFFN Act 2007, which empowers the council to educate freight forwarders to be at par with counterparts in other countries.

Nwakohu commended the Chairman, House of Representatives Committee on Ports, Harbours and Waterways, Dr. Pat Asadu, for sponsoring the project, according to a statement by the CRFFN Head of Corporate Affairs, Uromta Chinyere.

On his part, Asadu commended the CRFFN leadership for the initiative, stating that the accreditation of the Centre for Logistics and Transport at UNN would immensely benefit the people of South East geopolitical zone in particular and Nigerians at large, while restating his commitment to nurturing the centre to an enviable standard.

Responding on behalf of the UNN Vice Chancellor, Coordinator of the Centre, Prof. Fab Onah, thanked the CRFFN for the initiative, as well as Asadu for ensuring that the centre received accreditation from the UNN Senate. He assured that the centre would promote learning in the designated fields, as well as skills acquisition for practitioners.

Similarly, both the Chairman, Governing Council Committee on Media and Inter-Governmental Agencies, Dr. Billy Gillis Harry, and the Chairman, CRFFN Education and Training Committee, Dr. Kayode Farinto, noted the accreditation as testimony to UNN’s preparedness to promote freight forwarding and supply chain business in the country. They described freight forwarding as a very critical segment and economic neck of the nation. The CRFFN has recently partnered the University of Lagos for a similar centre.