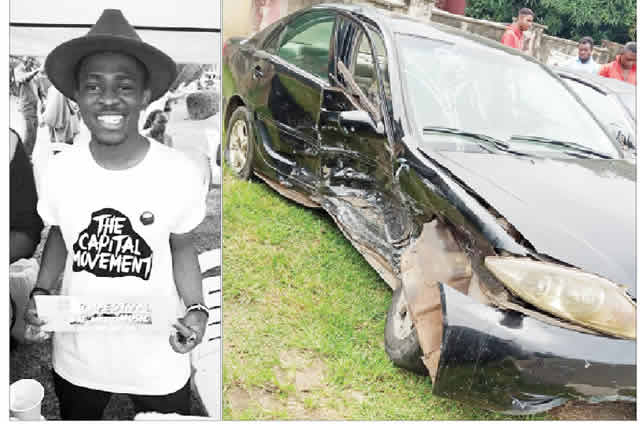 A 22-year-old member of the National Youth Service Corps, Tony Zitta, has been killed in an auto accident.

PUNCH Metro learnt that Zitta had gone to drop off a friend after an event on July 29 and was on his way back when his car was bashed by another vehicle at the Diamond Bank Junction on Ademola Adetokunbo Way, Wuse II, Abuja.   It was gathered that the driver, who was allegedly speeding, rammed into Zitta’s car from the passenger’s side, leaving the victim unconscious.   Our correspondent learnt that some policemen, who were the first responders at the scene, allegedly tried to steal some of Zitta’s belongings but were prevented by sympathisers.   One of Zitta’s friends, Sowa Alonge, who spoke to PUNCH Metro, accused the police of aiding the escape of the unidentified driver.   He said the driver escaped in an Uber car, adding that the police allegedly removed the number plate of his vehicle so that nobody would trace him.   Alonge, who co-founded a non-governmental organisation with Zitta, said, “The police took his personal effects instead of rushing him to a hospital. But some ladies that were around did not allow them to take the items away.   “The driver of the BMW that bashed Tony (Zitta) got into an Uber car with his friends, and called a towing vehicle to tow his car away. But people prevented them from towing the car.   “Sympathisers told us that the driver bribed the policemen, but people around did not allow the towing vehicle to tow the car.   “They made sure that the two vehicles were towed to Zone 3 Police Command.”   Alonge added that a Good Samaritan rushed Zitta to the Gariki General Hospital from where he was transferred to the Wuse General Hospital.   He explained that Zitta was again referred to the Gwagwalada Teaching Hospital due to lack of bed space at the Wuse General Hospital.   He said, “We were told that there was blood in his head which had been drained. They said he was stabilising. He died the next morning due to complications.   “The Deputy Commissioner of Police in Zone Seven came to Zone Three and told them to take the case seriously and the inspector handling the case said a Superintendent of Police in one of the police stations called him and said that he knew the owner of the BMW and that the owner is in a hospital.   “The SP was trying to find information about Tony (Zitta) and we played along as if he was still alive. He said he was going to send some people to check the state of the car.   “The DCP suggested to them to use the engine number of the car to find the suspect, but they ignored the DCP.”   He noted that Zitta’s mother was distraught as he was the only son of the family.   Zitta’s friend called for justice for the victim.   The Police Public Relations Officer, FCT Command, DSP Anjuguri Manzah, said the police did not aid the suspect’s escape, adding that efforts were on to arrest him.   He said, “The case is still under investigation and the police do not have anything to hide in the case. It is unfortunate that we lost the young man; we sympathise with his friends and family.   “At first, we did not know the owner of the car. But after our investigations, we have been able to identify the car owner and we are making efforts to ensure his arrest. There is no cover-up in the case because ours is to serve justice to whoever deserves justice.”
Post Views: 902