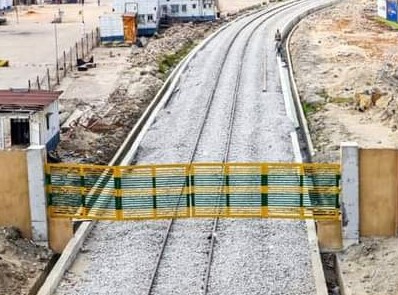 An end is in sight to the perennial gridlock in Apapa as the Nigerian Ports Authority (NPA) makes another major breakthrough with the connection of the Lagos-Ibadan rail line to the Apapa ports in Lagos.

A multi-pronged approach that includes evacuation of cargoes by road and barges is already in place, while the now-added rail line will complete and strengthen the inter-modalism, which is expected to drastically reduce the traffic congestion from trucks on the port access roads.

In a tweet, the handler of the rail project, China Civil Engineering Construction Company (CCECC), said the linking aspect of the project, which had raised some dust recently with its blocking of some terminals, was completed on January 25 with “the successful pouring of the last 25-meter monolithic track bed superstructure of Apapa Port Break Bulk Line.

“The Apapa Port Spur Line of Lagos-Ibadan Railway starts from the Mobolaji Johnson Station, Ebute Metta and extends southward to Apapa Port, with a total length of 8.72km.

“As a crucial channel linking the main line of the Lagos-Ibadan railway to the port, it has become an important transportation passage for the import and export of goods and now serves as a significant guarantee with regards to the comprehensive operational efficiency of the railway.

“The Apapa Port Spur Line, passing through the old town of Lagos, was an extremely tough nut to crack because of its dense underground pipelines, high underground water level, complex geological conditions and numerous ground constructions.

“The project department made full preparations at the very beginning. Through nearly three years of unremitting efforts, the project is now progressing smoothly.

“CCECC worked around the clock, while ensuring pandemic prevention and control, and finally completed construction of two culverts, nine groups of switch laying, 2.2km of ballasted track laying, and pouring of the 793m monolithic track bed within one month, demonstrating the speed and responsibility of CCECC constructors.”

On its part, the NPA tweeted its pleasure “with the news of the completion of rail connection of Lagos Ibadan Rail to Lagos Port Complex, Apapa. The Authority is committed to inter-modalism for efficient cargo evacuation. Decongesting Apapa remains a key priority of this management.”