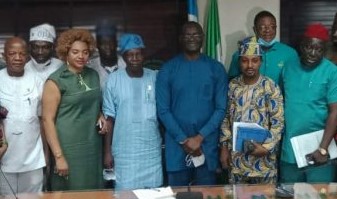 However, following the intervention of the Executive Secretary of the Nigerian Shippers’ Council, Mr. Emmanuel Jime, the associations have resumed clearing activities on general cargo at the affected ports, Tin Can and PTML.

Jime, who hosted representatives of the associations, including the Association of Nigeria Licensed Customs Agents (ANLCA) and National Association of Government Approved Freight Forwarders (NAGAFF), had pleaded for resumption of work to allow dialogue.

He commended the clearing agents for their patriotism, since their protest was not against the VIN policy but its implementation. He further assured to escalate the matter to the Ministry of Transportation and management of the NCS for understanding and amicable resolution by all relevant parties.

Meanwhile, to help the NSC fast track a resolution, Jime constituted a committee comprising some clearing agents and members of the NSC, with mandate to list the unions’ grouses against the VIN policy and their demands.

The associations, insisting on their preference for automated system, had told the NSC management that the NCS’ outrageous duty on imported used vehicles based on the recently introduced VIN valuation policy rather than transaction value was unacceptable and mischievous.

ANLCA National Secretary, Abdullazeez Babatunde, while presenting the unions’ position, expressed concern that contrary to the globally accepted and rational practice, the policy deliberately ignores the wear and tear and depreciation value of the vehicles in generating duties.

For instance, he explained that a 2012 car model with a market value of less than N4 million is now rated about N12 million. Therefore, they demanded a temporary return to manual valuation till the issues resolved.

Similarly, the NAGAFF Deputy National President, Dr. Segun Musa, expressed dismay that rather than encourage trade facilitation, “vehicle smuggling will increase and government will have to channel its limited resources to combating smuggling.

“If this isn’t nipped in the bud, there is also the tendency for customs to come up with similar approaches for other goods. This will push importers away; companies will shut down and jobs would be lost, while government uses the limited resources to buy guns to fight smugglers.”

Babatunde disclosed that the NCS leadership had a week earlier assured the agents that it would suspend the VIN valuation system but reneged on that. According to him, “we met the customs and conveyed these concerns. We also appealed to the comptroller-general of customs in subsequent letters.

“It is important to note that 70-90 per cent of vehicles are imported through Tin Can and PTML. Customs agreed that the VIN valuation design neglected the extant laws on wear and tear as well as the 10 per cent depression in value of used cars.

“Less than 10 per cent of the vehicles at the ports were able to access customs portal for the duties. There are several issues that we observed and we asked them to revert to manual process while these issues are resolved.

“We aren’t against automation because it is what we have always wanted, but the process must be transparent and realistic.”