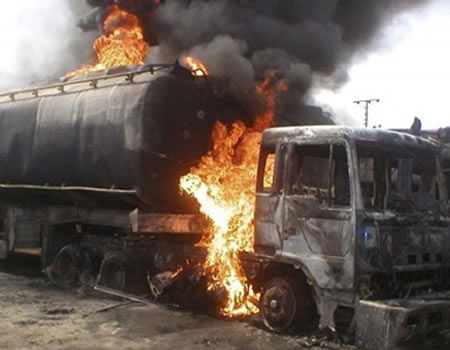 A number of Lagosians have been feared dead, while several others were wounded at Otedola –Berger Area of Lagos, as a tanker, said to be fully loaded was said to have burst into flame, in the area, destroying cars and injuring some occupants of the vehicles. While the cause of the incident is yet to be ascertained, an eyewitness, stated that the driver of the tanker must have lost control while trying to ascend the Otedola Bridge when the vehicle developed fault and caught fire in the process. The fire was said to have affected vehicles behind the tanker. Over thirty vehicles were said to have been  completely destroyed in the process “Two firefighters are presently on ground to quell the fire, while we are presently taking refuge at a nearby filling station. I have counted over thirty vehicles completely burnt in the process ” said the eye witness.
Post Views: 851