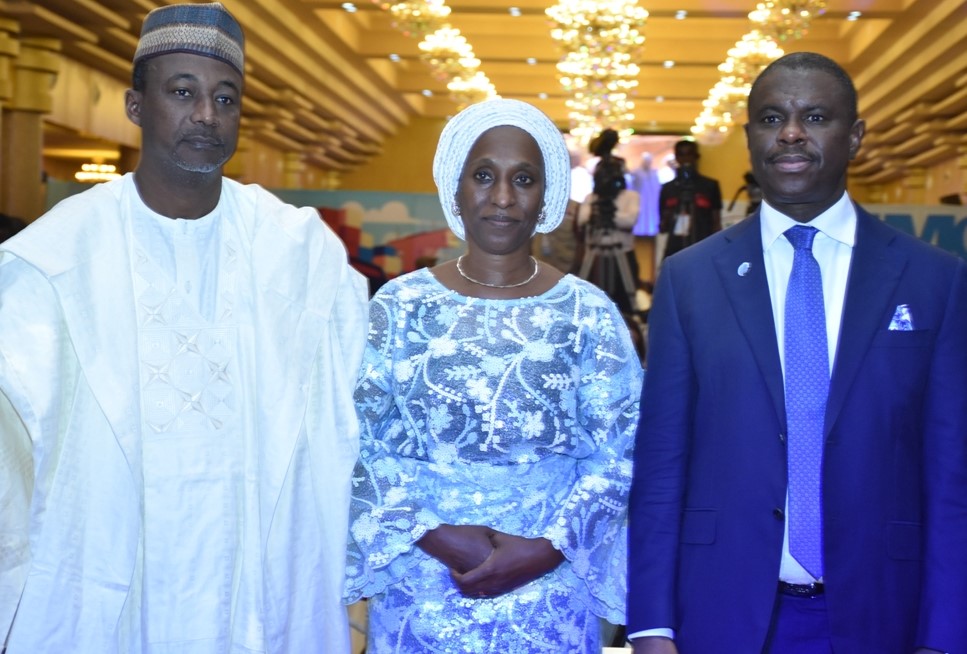 Wife of the Vice President, Dolapo Osinbajo, flanked by the Permanent Secretary, Federal Ministry of Transportation, Sabiu Zakari (left), and NIMASA Director-General, Dr. Dakuku Peterside, during the 2019 Day of the Seafarer celebration in Lagos…Tuesday

For women to reach their potential, navigate workplace challenges and avail the nation the economic benefits, the First Lady, Aisha Buhari, has called for gender balancing in the seafaring career.

Aisha, who spoke in Lagos Tuesday at the 2019 Day of the Seafarer, with the theme, “On board with Gender Equality,” said that President Muhammadu Buhari was determined to provide platforms that would encourage more women’s participation in maritime to boost economic development.

Represented by the wife of the Vice President, Mrs. Dolapo Osinbajo, Aisha commended the Nigerian Maritime Administration and Safety Agency (NIMASA) for promoting and encouraging women in the sector, adding that under its current leadership, there have been significant strides at making women active players in the blue economy industry.

She further called on “all government agencies, especially those in the maritime sector, to ensure the achievement of the United Nations’ Sustainable Development Goal 5, which is aimed at attaining gender equality and the empowerment of all women and girls.”

On his part, NIMASA Director-General, Dr. Dakuku Peterside, described such support from men as “critical,” stating that to have more women at sea and onshore, “men have a major role to play in terms of providing the needed support.” He assured that agency would pursue policies and programmes that will accelerate gender equality and women empowerment in the sector.

“In addition to the 304 female cadets we have trained in seafaring since the inception of the Nigerian Seafarers Development Programme (NSDP), greater attention will now be given to training female seafarers in specialised courses and areas to enable them take up professional responsibilities in specialised vessels and offshore operations, and maritime sector generally,” Peterside said.

Similarly, the agency will give priority and provide enabling environment for female seafarers in the placement of women on board vessels in the New Cabotage Compliance Strategy (NCCS), which suspends waivers on Cabotage manning, he assured.

Also, President of the World Maritime University (WMU), Dr. Cleopatra Doumbia-Henry, commended Nigeria for encouraging more female professionals in the industry, which has ensured that about 15 of the 31 female graduates, from a total of 199 Nigerian alumni of the institution, had government from NIMASA and support from the Nigerian Ports Authority.

Meanwhile, amidst the campaign for gender equality in the sector and the imperative of growing indigenous shipping, the Executive Secretary of the Nigerian Shippers Council (NSC), Mr. Hassan Bello, has raised worries about the $9 billion spent on foreign ships as wet and dry cargo freight last year.

Bello, in his address at the occasion, said such huge revenue, which would have boosted the economy and also translated to more sea time for indigenous seafarers, was lost to foreign players due to the absence of a national fleet.

Lamenting the fate of women in the sector, he noted that isolation, bullying, hostility, gender discrimination, unequal pay, work-life imbalance, lack of information and sexual harassment, among others, have reduced women’s productivity and participation in seafaring.

Similarly, the President, Ship Owners Association of Nigeria (SOAN), McGeorge Onyung, noted that without ships, all talk about gender equality would amount to nothing. Therefore, he pledged to work with NIMASA towards ensuring that members of the association and other interested indigenous stakeholders are able to acquire ships.

The Day of the Seafarer is celebrated all over the world on June 25 every year following the resolution adopted by the 2010 diplomatic conference in Manila, Philippines, in line with the International Convention on Standards of Training, Certification and Watchkeeping for Seafarers (STCW Convention).

The International Maritime Organisation (IMO) adopted “On Board with Gender Equality” as the main campaign theme to celebrate the 2019 Day of the Seafarer, which echoes its theme, and coincides with NIMASA’s disposition as a gender-sensitive organisation.