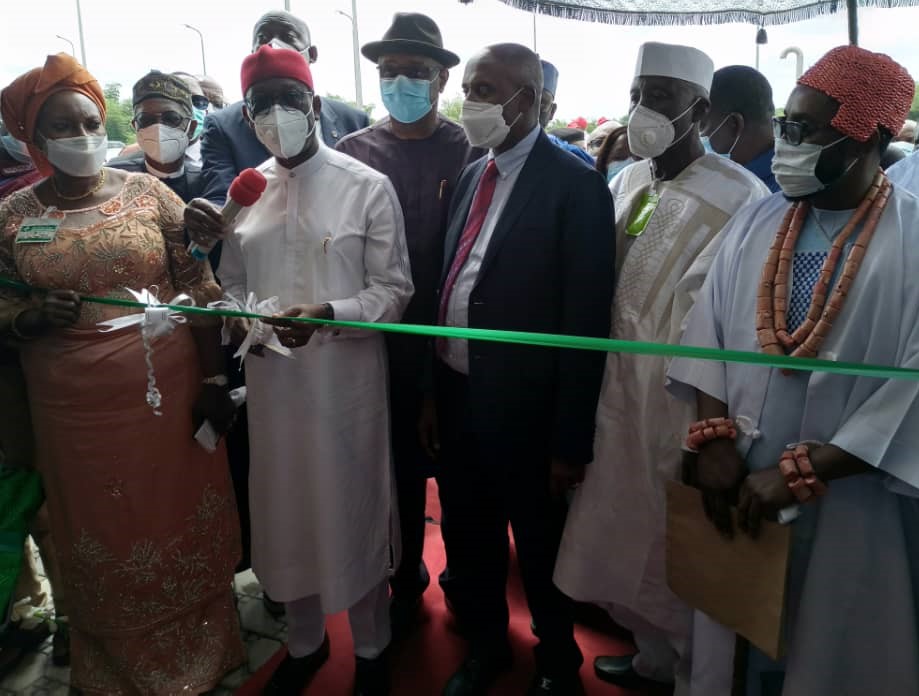 To improve Nigeria’s transportation and overall economic capacity, President Muhammadu Buhari has directed the Federal Ministry of Transportation to link all ports of origin and destination, including Apapa, Tin Can, Warri, Onne and Calabar, to the rail network.

Buhari, who gave the directive Tuesday at the Goodluck Jonathan Railway Complex at Owa-Oyibu, Agbor in Delta State during his virtual commissioning of the 326km Itakpe-Ajaokuta-Warri rail line and the ancillary facilities yard, also directed that the line be extended to Abuja and completed during his tenure.

Excited at the commencement of commercial operations at the economic facility which construction began some decades ago, Buhari described rail transportation as a vital backbone that supports industrialisation and economic development.

“Accordingly, I have approved the prioritisation of viable railway routes for either new rail lines or the reconstruction and rehabilitation of some, to achieve effective and efficient train services supporting the country’s trade and commerce.

“The rail infrastructure that I have the honour to commission today is the rail line from Itakpe via the steel town complex of Ajaokuta to Warri, and is an important link for the country’s economy as the central rail line.

“This government has also approved to link this line further from Itakpe to Abuja, thereby connecting the northern zone and also extending southwards to link the Warri Ports.”

Stating that the project would be completed during his tenure, he stressed that the project, which links the South-South geo-political zone to the northern part of the country, “will link people across the cultural divides and expand the frontier of trade and commerce, which will lead to better standards of living for our citizens.”

He urged all Nigerians for support to maintain the facility and realise other railway projects, adding: “I implore those who work on this line to uphold maintenance and safety culture necessary for long-lasting service in this difficult terrain.

“By the same token, I urge other sectors who will be primary beneficiaries of this transportation backbone, including the iron and steel sector, stakeholders in agricultural and mining sectors on this corridor, as well as the host communities to protect and sustain this infrastructure and maximise the benefits that could be derived from it and which are readily available at their doorsteps.

“This project will increase the volume of their trade and kick-start and resuscitate the iron and steel complexes. All these, I hope, will improve our industrial potential and capacities as well as boost employment.”

According to him, the route is estimated to move one million passengers and approximately 3.5 million tonnes of freight yearly, servicing all off-takers on the corridor and beyond.

On his part, Delta State Governor, Ifeanyi Okowa, commended the president, saying “it is a thing of pride and joy that this rail line was completed under your watch. Deltans are excited that this day has come.”

Okowa also wooed the private sector to establish along the corridor investments that will create jobs for locals, curb youth restiveness and stem the tide of criminality, just as “it is imperative that the Federal Government, in collaboration with the states, provides adequate security cover for this rail line corridor.”

Similarly, Edo State Governor, Godwin Obaseki, was thankful that Edo State has a few stops that have been completed, assuring that they would be working with the Federal Government to utilise the infrastructure.

He appealed that the rail facility be extended to the industrial park in Benin City to facilitate the movement of goods to the northern part of the country.