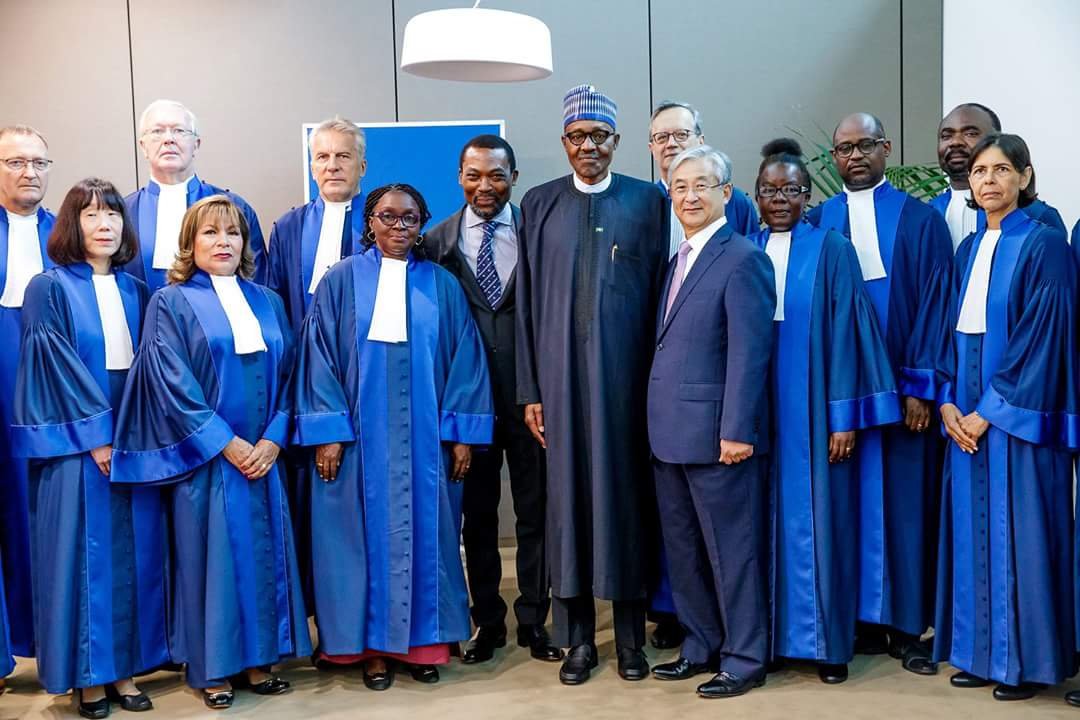 Deji Elumoye and Omololu Ogunmade in Abuja President Muhammadu Buhari Tuesday in The Hague, Netherlands, assured the International Criminal Court (ICC) that his administration would deploy every power within its reach to conduct free, fair and violence-free polls in 2019. Buhari made this pledge while delivering a keynote address at the 20th anniversary celebration of the ICC, being presided over by a Nigerian, Justice Chile Eboe-Osuji. The president’s declaration at The Hague reverberated at home as his letter presenting the 2018 Supplementary Appropriation to the National Assembly was separately read at both chambers. In it, he among others, asked for N242 billion for the use of Independent National Electoral Commission (INEC), the police and other security agencies to conduct the 2019 general election, he promised the ICC judges would be clean. Buhari told the court that as Nigeria inched towards the 2019 general election, his administration would not only strive hard to conduct free and fair polls, it would also ensure that similar violence, which accompanied the 2011 elections that became a subject of investigation by ICC would not repeat itself. Several young and innocent Nigerians particularly youth corps members were killed by some blood thirsty hounds in the North who were protesting the loss of Buhari, the then presidential candidate of the Congress for Progressive Change (CPC) to Dr. Goodluck Jonathan of the Peoples Democratic Party (PDP). The hues and cries which accompanied these brutal killings drew the attention of the ICC which promptly launched investigation into the tragic episode. However, Buhari while recalling this tragic episode of 2011 and the subsequent intervention of ICC Tuesday, assured the court that the trend would not repeat itself. “In conclusion, let me intimate you that Nigeria is preparing to conduct general election in 2019. Contrary to the tragic incidents that characterised the 2011 general election in Nigeria which necessitated preliminary investigations by the ICC, I assure you that all hands are on deck to prevent any recurrence of such tragic incidents. We shall do everything possible to ensure that Nigeria witnesses the conduct of free, fair and peaceful elections in 2019,” Buhari said. Buhari, who congratulated Eboe-Osuji on his election as the President of ICC, thanked judges of the court for electing the Nigerian-born judge, whom he described “as a cherished son of Nigeria,” adding: “Nigeria is very proud of you, Mr. President.” Buhari, who recalled that ICC was established 20 years ago as a global court following the Nuremberg trials of World War II war criminals, to hold people accountable for crimes against humanity, war crimes, crimes of genocide and aggression, submitted that Nigeria had cooperated with the court in all ramifications. According to him, Nigeria’s cooperation with the court is predicated on its strong belief in the principles of rule of law as well as its commitment to fundamental freedom as contained in the objectives of the ICC. “Nigeria has cooperated with, and supported the court at all times. This, we have demonstrated by our full and transparent cooperation on matters on which we are being investigated and also in our several country statements at the sessions of the court. “Our cooperation with the Court is borne out of our strong belief in the respect for the rule of law and human rights, and in our firm commitment to the sanctity of fundamental freedoms at international and domestic levels, as ingrained in the objectives for establishing the court,” Buhari added. The president, who said with the increasing spate of crimes across the world today, the ICC’s interventions were more needed than ever, was also swift to recognise that ICC is limited by its inability to act on prevalent crises in states that are not parties to the ICC treaty. Notwithstanding, Buhari challenged the court to act promptly within its jurisdiction, noting that by doing so, “the ICC reinforces the demand for justice far beyond its own cases”. According to him, if ICC portrays itself to be strong and effective, it will succeed in sending a strong message to the entire world, despite its limitation, on the commitment of the international community to the principles of accountability, rule of law and corrupt free society. “A strong and effective ICC can also act as a catalyst for other justice efforts, expanding the reach of accountability. These could include serious cases of corruption by state actors that severely compromise the development efforts of countries and throw citizens into greater poverty. “These could also include cases of illicit financial flows where countries are complicit and obstruct repatriation of stolen assets. As the African Union Champion on Anti-corruption, these are issues dear to my heart,” Buhari said. He enumerated some of the challenges facing the court to include: withdrawals and threats of withdrawals of some member states as well as accusations of bias in its exercise of the jurisdiction. However, he was swift to add that the court “has addressed these challenges in a dignified and commendable way”.
Post Views: 778