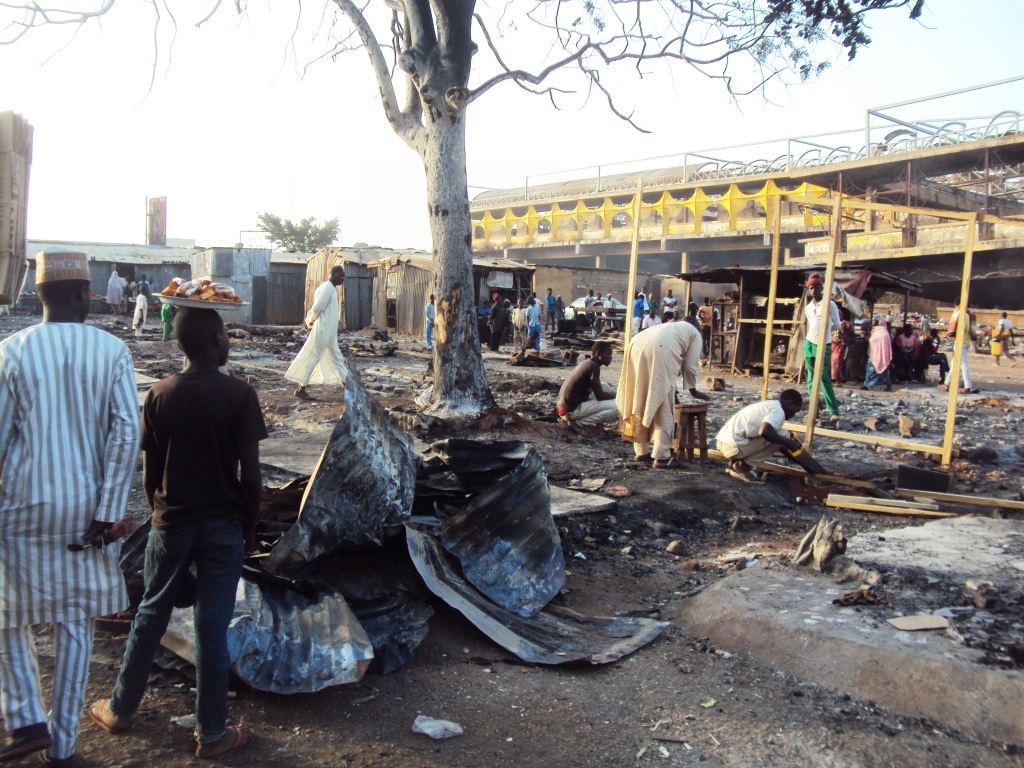 Friday OLOKOR, Jos
Traders from different ethnic nationalities on Saturday morning broke down in tears following a fire outbreak which gutted the popular Terminus Market in Jos.
The market which is mostly populated by Igbo businessmen was said to have been destroyed some years ago following a bomb explosion which was allegedly linked with the Boko Haram Islamic sect.
During the latest fire incident which was said to have started last night, several warehouses were burnt to ashes.
The cause of the fire, officials and the victims could not say but while some said the fire started at about 1.30am, the State Fire Service said it got a call at about 12.30am and got to the scene at about 12.45am.
The affected shops deal mostly with second hand clothing, bags, shoes and other accessories.
As at about 8am, smoke was still emitting from the area though the State Fire Service had battled to put out the flames and some shop owners were seen in groups discussing the incident while some were searching through the rubbles to see what they could salvage.
Speaking at the scene, the State Commissioner of Police, CP Adie Undie, the Management Committee Chairman of Jos North local government area, Mr. Philip Nyam and the Chairman, Traders’ Association, Abdulrahman Yussuf explained what they know about the incident. According to the CP, “This incident happened in the wee hours, we received a report, my DPO in-charge of this area got a report and he promptly alerted me and we equally alerted the State Fire Service and they too did not waste time.
They mobilized their men but because of the location of this point of incident, it made it difficult for the Fire Service to promptly put out the fire and avoid the kind of damage that we have here.
The total amount of money lost to the incident could not be ascertained as of the time of this report.
The spokesperson of Plateau State Police Command, Matthias Tyopev, a Deputy Superintendent of Police, confirmed the fire incident in an interview.
He said, “Yes, there was a fire incident at the popular Terminus market in Jos. Goods and warehouses were destroyed. The Plateau State Commissioner of Police (Undie Adie), and chairman of Jos North Local Government Area were there to ascertain the level of damage and you will get the details from me later.
“For now, we can’t estimate the total amount lost because of the fire because so many people were involved; the money lost unquantifiable because the fire incident was very severe.”
Post Views: 1,428