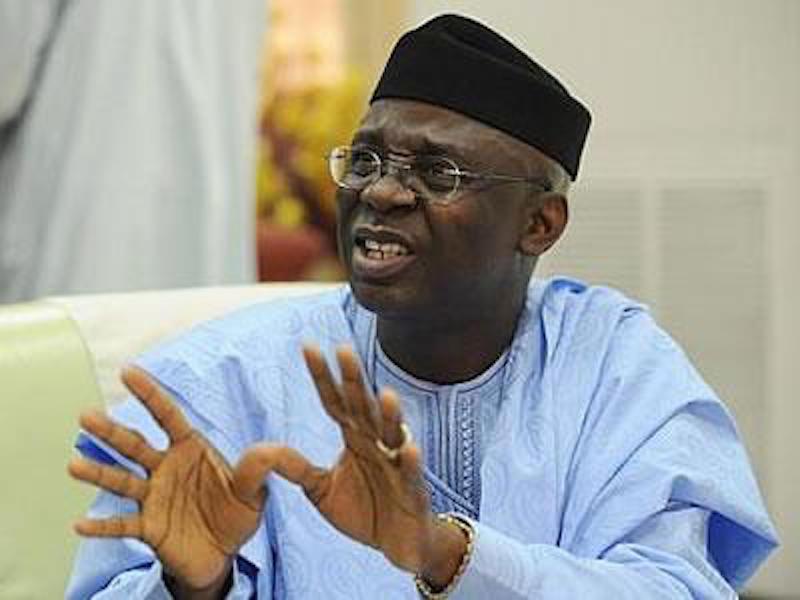 By Omololu Ogunmade in Abuja

The Overseer of the Latter Rain Assembly, Pastor Tunde Bakare, yesterday in Abuja said he met with President Muhammadu Buhari in the Presidential Villa to thank him for dispatching a high profile delegation to the funeral of his mother penultimate weekend.

Bakare emphasised that he did not meet with the president along with the Minister of Finance, Mrs. Kemi Adeosun, as widely reported by different media platforms yesterday.

Various media platforms had reported that both Bakare and Adeosun met with Buhari behind closed-doors after the ju’mat service because both of them were seen together in the Villa.

The reports had created the impression that both personalities met with the president over the alleged National Youth Service Corps (NYSC) certificate scandal involving the minister.

But Bakare in a swift reaction, described the reports as very cheap, explaining that he only met the minister at the lobby of the Presidential Villa after which she went to attend a different meeting while he himself went to see the president.

He added that the impression created by the reports was that the minister had brought him to the Villa to meet the president on her behalf whereas they both arrived the Villa at different times.

Bakare said: “The story published by some social and print media today is both and sensational journalism. Hon. Min. Kemi Adeosun and I arrived at the Villa at different times. We met at the corridor.

“She went on to see someone else in the Villa and I went into a closed door meeting with PMB alone to thank him for sending a powerful delegation to my mother’s home-going celebration. This is the truth. The impression being created is as if she ran to me to speak to the President on her behalf. This impression is erroneous and false.”

Earlier, the presidency has debunked reports that Pastor Tunde Bakare of the Latter Rain Assembly and Minister of Finance, Mrs. Kemi Adeosun, met together with President Muhammadu Buhari at State House, Abuja, Friday.

Earlier, the president’s spokesman, Mr. Femi Adesina, in a statement, said the claim that both personalities simultaneously met the president was “far from the truth.”

According to the statement, Adeosun was in the State House in connection with the Annual General Meeting and 25th Anniversary Celebration of African Export-Import Bank (AFREXIMBANK) scheduled to hold on Saturday in Abuja and would be attended by Buhari.

Furthermore, Adesina said Adeosun only coincidentally ran into Bakare whom he said was on a scheduled visit to the State House to see the president, explaining that they only exchanged pleasantries.

He also said the pastor particularly thanked the minister for finding time to attend his mother’s funeral which took place in Abeokuta, Ogun State, penultimate weekend adding that Adeosun had seen Buhari no fewer than three times earlier this week, and had no reason to meet with him again yesterday.

According to him, the statement was necessary to put issues in proper perspective, and equally dispel speculations and assumptions.

Speculations about the meeting of Bakare and Adeosun with Buhari was the fallout of an online medium’s report at the weekend that the minister who graduated from London East Polytechnic at the age of 22 in 1989, failed to comply with provisions of the NYSC Act which made it compulsory for every Nigerian graduate at home and abroad to participate in one year mandatory service to the country before he/she could work anywhere in the country.

The report had stated that whereas Adeosun who returned to Nigeria from London in 2002 failed to observe the scheme but rather proceeded to work in different places and in 2009.

The report also said that when it dawned on her that she might run into trouble, she allegedly procured a forged certificate, claiming exemption that is only obtainable by those who have exceeded 30 years of age upon graduation.

According to the report, since Adeosun was 22 when she graduated, the claim of exemption was completely false.

The report also claimed that whereas the allegedly forged certificate was dated September 2009 and signed by a former NYSC director, Yusuf Bomoi, now deceased, Bomoi actually exited NYSC in January, 2009, nine months before the certificate was allegedly obtained.

The NYSC in its reaction to the report said Adeosun applied for exemption certificate adding that it is currently investigating the allegation of forgery against the minister.