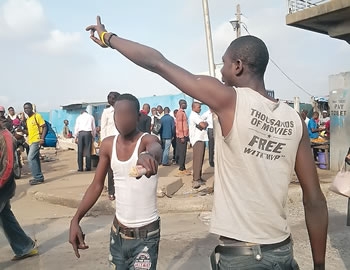 By Emma Amaize, South-South ASABA- GUN-WEILDING youths of Agbarho community, Ughelli South Local Government Area, Delta State, laid siege to the palace of their monarch, King Samson Oghugunwa, raging over the manner of deployment of the community’s vigilante by the traditional ruler. Speaking on the development at Asaba, Commissioner of Police, Delta State Police Command, Muhammad Mustapha, disclosed that four villagers, Oruwa Godswill, Ikurusu Aghogo, Ochuko Shishe and Collins Eneayevwa were injured when the wild protest escalated to the streets. He, however, said that police had brought the matter under control, while the injured were rushed for treatment and were in stable condition at Eloho Clinic, Agbarho. Mustapha disclosed that the youth of Agbarho, led by a community leader and retired army general, “came en masse to protest against the absolute control of the community vigilante by the traditional ruler, King Samson Oghugunwa.” “The youth forced their way into the king’s palace and drove away the vigilante’s Toyota Hilux vehicle parked in the palace. “The protest continued into the streets of the town with the young men burning tyres and shooting guns during which some people were injured by stray pellets, but with the quick intervention of the police, the situation was brought under control,” he said. Meanwhile, a 48-year- old contract staff with Chevron Nigeria Limited, CNL, Escravos in Warri South West local government area, Francis Onyesaanu, who hailed from Ilaje, Ondo state, slumped along the laundry walkway and died shortly after he was rushed to Chevron clinic. Commissioner Mustafa, who also confirmed the tragedy, said a Security Supervisor with CNL, Debo Balogun, reported the incident to the police. “While his corpse has being deposited in the company’s morgue, arrangement was made to transfer the corpse to a mortuary in Warri awaiting post mortem examination,” he added.
Post Views: 840