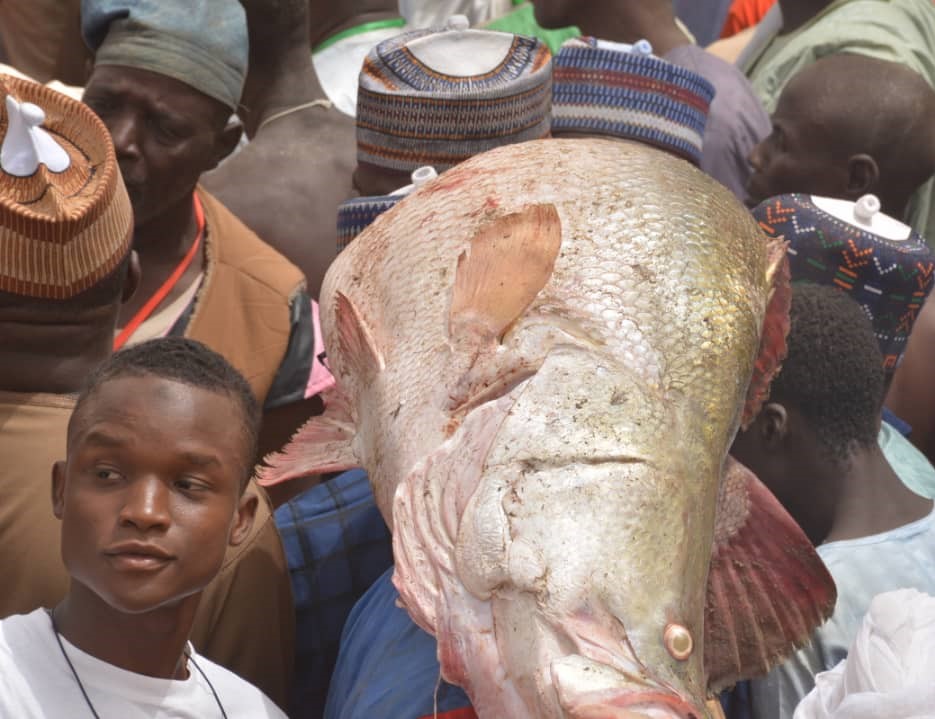 Winner of the star prize, Abubakar Yaro (left), poses with his 78kg catch at the grand finale of the Argungu International Cultural and Fishing Festival in Kebbi State today. Yaro carted home the top prize of a brand new car, another in complimentary gift and about N10 million in cumulative cash gifts

For an enduring peace in northern Nigeria, President of the Senate, Ahmed Lawan, has urged the private sector to help sustain and improve security through support funding of formal education for the over 14 million out-of-school children in the region and avert the “time bomb waiting to explode.”

He further advocated harnessing God’s abundant natural endowments, and providing the people with something to do, adding that “there is nothing better to do in Nigeria, and especially in this part of the country, than getting the people back to farms and to farm their lands.”

Excited at the return of the Argungu International Cultural and Fishing Festival in Argungu, Kebbi State, 10 years after it was suspended over insecurity, Lawan, who was guest of honour at the fishing event, which was the grand finale of the four-day festival, commend the various private sector sponsors and prize donors for their “sense of social responsibility.”

However, he told them that “before we engage in this kind of festivity, we can volunteer some kind of funds or resources for the educational uplifting of the communities where we operate, because you can achieve more when you educate your people.

“In the northern part of this country particularly, we are challenged with over 14 million out-of-school children. This is a big challenge to Nigeria in general, but to northern Nigeria, this is a time bomb waiting to explode. So, we need everybody – public, as well as private – to ensure that we educate our people.”

He disclosed that the National Assembly was working on the full implementation of the Universal Basic Education Act to ensure that out-of-school children, even if in phases of two million or more per year, are put in the mainstream educational system, without jeopardising the religious teachings they are supposed to learn.

Lawan also commended the armed forces for working so hard “with whatever we gave them to fight with,” even at the cost of their lives, adding: “And we have not been able to give them exactly what they need. We commend you for working with whatever our country is able to provide.”

Assuring of their continued effort to create a better operational environment for the military, he disclosed that the entire National Assembly has made certain resolutions on how to make Nigeria safer and more secure, which now await Mr. President’s approval.

He further called for regional cooperation to defeat insurgency, stating: “We need our neighbours to fight the kind of insurgency we have.

“When we fight, we should fight along with them, especially where we need everybody’s support. If we disagree, we should settle our matters as quickly as possible because sometimes, neighbours go through misunderstandings.