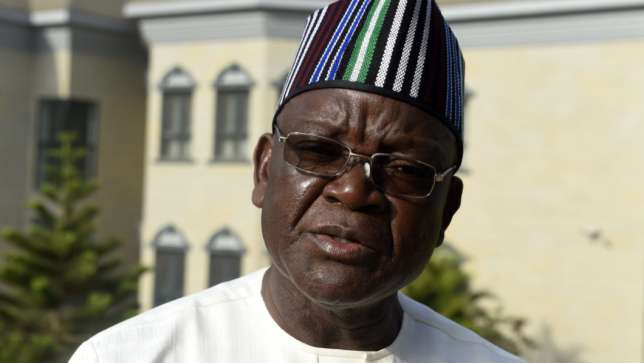 Benue State governor, Samuel Ortom, has decamped from the ruling All Progressives’ Congress (APC) to the People’s Democratic Party (PDP).

He made the announcement on Wednesday, July 25, 2018, at the Government House in Makurdi, the state capital.

During a meeting with elected local government chairmen and councillors, he disclosed that he was joining the PDP to ensure justice, equity and fairness for the people of Benue.

He said, “The 22 local governments represented by the councillors here and then the 13 local government chairmen have unanimously endorsed that my stay in the APC has expired, that I should look for another platform. On that note, I have formally resigned from the All Progressives’ Congress.

“With your support, and because you have given me a blank cheque to also nominate a party that we can further fight to ensure justice, equity and fairness for the people of Benue State, let me formally announce to you that I now would join the People’s Democratic Party.”

Ortom made his announcement only hours after a large number of Benue youths formed a human barricade and stopped his convoy from leaving the Government House to attend a reconciliation meeting with the national leadership of the APC in Abuja on Wednesday.

The youths asked the governor to resign his membership from the APC or lose the support of the people. His pleas to be allowed to attend the meeting and protect the interest of the people of the state fell on deaf ears and he was forced to make a U-turn and return to the Government House.

The governor’s Chief Press Secretary, Terve Akase, told the press that the governor’s decision is in compliance with the wishes of the Benue people.

“The youths came and asked him not to go to Abuja for any meeting with the APC national chairman that they don’t want him to continue in APC. The governor is a people-oriented governor, he obeys the wishes of his people, so he has done just what the people want,” he said.

Ortom, a former Minister of State for Trade and Industry, had dumped the PDP for APC in 2014 after he lost out at the party’s gubernatorial primary election.

The governor’s defection comes as no surprise as he has had a frosty relationship with the federal government in the past few months on the back of violent killings in the state which has led to the death of hundreds.

The governor has repeatedly accused the Miyetti Allah Kautal Hore of sponsoring cattle herders to kill residents of rural communities, claiming in May 2018 that an estimated 492 people had been killed by herdsmen.

The governor’s several public calls have been ignored by the federal government and the governor’s frustration has been public knowledge for months.

His defection finally happened a week after he said the APC had kicked him out and announced that he was shopping for a new party. However, he was back with the party on Thursday, July 19 as he declared, “I am here in APC, a member of APC, I’m still flying the flag of APC” after a meeting with the party’s national leadership in Abuja.

Ortom’s defection also happens just a day after 14 Senators left the ruling APC, with 12 moving to the PDP and the other two pitching tent with the African Democratic Congress (ADC), the political party adopted by the Coalition for Nigeria Movement (CNM) launched by former president, Olusegun Obasanjo.

37 members of the House of Representatives also dumped the party on Tuesday. 32 of them moved to the PDP.