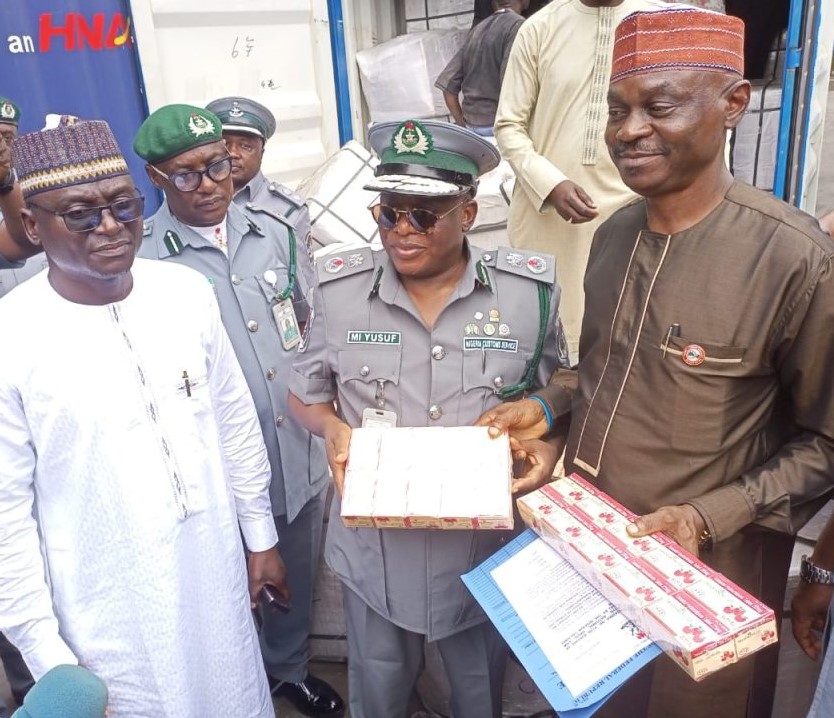 The Nigeria Customs Service (NCS) and the National Drug Law Enforcement Agency (NDLEA) have raised alarm at the much higher concentrate of the tramadol brand recently intercepted and handed over to the anti-drug agency in Lagos, warning of its universal vulnerability.

Compt. Malanta Yusuf of the Apapa Area Command of the NCS over the weekend handed over to the NDLEA 150 cartons of tramadol worth N6 billion, which were imported from Pakistan and concealed in towels in a 20-ft container.

Receiving the contraband consignment, however, the NDLEA Commander of Narcotics, Apapa Special Area Command, Ameh Inalegwu, said that even where allowed, “the legally accepted milligram for tramadol is 50mg, but here we have five of that in one. Under the influence of this drug, everybody is vulnerable.

“A carton of the tramadol is not less than N20 million, while the entire drug is worth more than N6 billion. The agency is going to court to get permit to destroy the drugs.”

According to Compt. Yusuf, the drugs were concealed with towels in the container which true content was not declared, but operatives working with the Forensic Manifest Management System were able to crack it nonetheless.

Also handed over to the NDLEA for further investigation was a suspect arrested in connection with the seizure, while Yusuf noted that the success of the anti-smuggling campaign will strengthen the existing relationship among the NCS, NDLEA and other relevant government agencies operating in the port.

“The fight against illicit drug abuse and trafficking is everyone’s business,” he said. “The Nigeria Customs Service is all out to support the NDLEA in combating this ugly menace decisively. We have just started; we would make sure that all these illicit drugs have no place in Apapa command.”

On his part, Inalegwu commended the synergy between the Apapa Customs Command and the NDLEA, adding that “just about a month ago, we had this kind of handing over, whereby two containers were handed over to us; this is the Apapa spirit.

“My chairman is very appreciative and is ready to project and commend any officer of the security agencies that would partner the NDLEA.

“I want to commend the area controller. My chairman is very proud of you. When I had the opportunity to put the records before him, he assured of the length he would go to recommend you and I am sure it is on the way, if it has not come.”