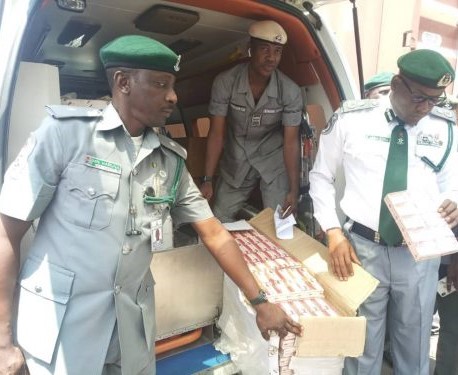 Compt. Abba-Kura (right) displaying some cartons of the intercepted tramadol in the ambulance at the Apapa Port…Wednesday

The Apapa Area Command of the Nigeria Customs Service (NCS) has intercepted two suspected third-party agents with 10 cartons of 225mg tramadol tablets valued at N2.8 million as they were about smuggling the items out of the port in an ambulance.

Michael Ajibade (driver) and Olatunde Emmanuel (escort and dockworker), were reportedly intercepted by customs officers at 11p.m last Friday in the ambulance, which belonged to Medbury Medical Services, an industrial medical services provider, and was usually stationed at the port complex for medical emergencies.

Addressing newsmen Wednesday in Lagos, Compt. Mohammed Abba-Kura said the officers were on routine surveillance when they suspected that the vehicle was laden with prohibited articles of trade.

He disclosed that the container, allegedly shipped from India by Pacific International Limited (PIL) as general merchandise, was neither declared nor yet positioned for examination but on examination after the suspects’ interception and further revelation, its original seal was found to have been broken.

However, “preliminary investigations have commenced, with the command currently working hard to ascertain the level of involvement of others in order to get to the root of this unfortunate incident, before charging them to court.

On their own, the driver, Ajibade – an elderly man – denied knowledge of the content of the 10 cartons, stating that his yet-to-be-identified principal(s) promised him N2,000 to take the items across the Nigerian Ports Authority (NPA) gate, just as the dockworker, who escorted the articles, said he was promised N50,000.

Meanwhile, Abba-Kura revealed that the command generated N20.02 billion in the last 12 working days from July 1 to 15, having earlier declared a half-year generated revenue of N203 billion.