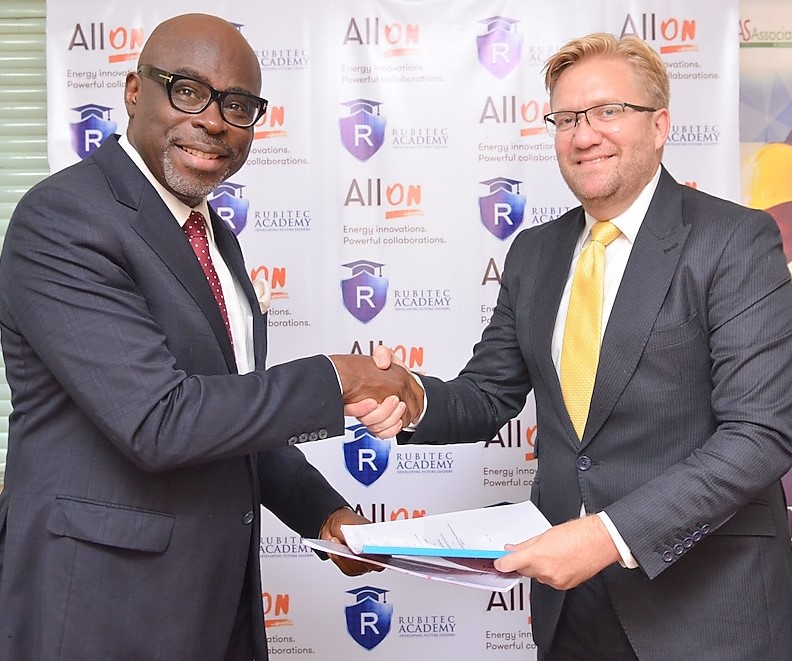 Chief Executive Officer, All On, Dr. Wiebe Boer (right), with the CEO of Rubitec Solar, Mr. Bolade Soremekun, after the signing of the training agreement in Lago

To improve reduce the cost of off-grid energy in the Niger Delta particularly and Nigeria generally, Shell-funded off-grid energy impact investment company, All On, is funding human and technological capacity scholarships for about 120 affiliate professionals.

The grant, which funds up to 50 per cent of the cost of distributed solar training programmes at the Rubitec Academy, is open to indigenes of the Niger Delta region and persons working within the region, while the training enables them to participate in the emerging off-grid/clean energy sector and improving their chances of economic independence.

Aimed at subsidizing the cost of training programmes at Rubitec Academy, the training arm of Rubitec Solar, the scholarship is part of the company’s contributions to the strategic capacity development in the solar energy sector for people from the “greater” Niger Delta, including Imo, Abia and Ondo states, as well as people working in the off-grid energy sector in the region, the company said.

Speaking during the signing of the agreement, the Chief Executive Officer of Rubitec Solar, Mr. Bolade Soremekun, noted: “We are proud to be part of the Nigerian energy revolution through renewable energy.

“It is an honour to be selected by All On as partners on this initiative. This scholarship will help bridge the identified gap of available skilled personnel due to increasing demand for renewable energy products and services.”

For the Chief Executive Officer of All On, Dr. Wiebe Boer, “the All On Niger Delta Off Grid Energy Scholarship Programme supports All On’s mandate to build an enabling environment in which the off-grid energy sector can thrive, in this case through providing the badly needed human capacity.

“The programme will ensures that an adequate skilled pool of men and women affiliated to the Niger Delta are developed to support the scaling of the sector.”

Rubitec Solar was established in 2004 to bridge Nigeria’s energy gap through the provision and deployment of renewable energy solutions to communities, businesses and public institutions. It will be using its expertise to train successful candidates in solar PV installation, mini-grid design, installation and operation, among others.

Similarly, All On is an independent impact investing company seeded with funding from Shell and works with partners to increase access to commercial energy products and services for under-served and un-served off-grid energy markets in Nigeria, with special focus on the Niger Delta.

It invests in off-grid energy solutions, including solar, wind, hydro, biomass and gas technologies from local and foreign access-to-energy companies that complement available grid power across Nigeria and help bridge the energy gap.

Residents of Ojo Local Government Area of Lagos State who voted in the February 23, 2019 National Assembly elections have expressed concern over the withholding of federal constituency’s result by the Independent National Electoral Commission (INEC).

Addressing newsmen Sunday, they claimed that the polls was worn by the candidate of the Peoples’ Democratic Party (PDP), Mr. Tajudeen Adekunle Obasa, adding that the electoral body has no justification to withhold the results over one week after the elections.

According to a PDP chieftain in the constituency, Mr. Adio Salami, the total vote cast showed that PDP scored 28,691 while the candidate of the All Progressives Congress (APC), Mr. Yinka Durosimmi, polled 25,545.

Salami maintained that with a difference of 3,146 votes, there was no reason the PDP candidate should not be declared winner of the election, adding: “The continuous withholding of the result by INEC is heightening tension among the good people of Ojo LGA, who wish to retain their representative for another four years.

“We as leaders are having it rough trying to claim them over what they are beginning to believe as INEC’s ploy to truncate their mandate. We will resist any of such plan by anybody to ensure that our popular mandate stands.”

Addressing the conference, the PDP House of Assembly candidate for Ojo Constituency 1, Mr. Adeoye Shanuolu, said there was election in three of the five polling units being alleged as inconclusive.

According to him, “the units are 015 and 056 of Ward 01 respectively; the result was signed by INEC officials, party agents and the security personnel that manned the place. It was only at unit 002, Ward 02 and unit 022, Ward 05, that there was no election due to logistics hitches.”

Obasa appealed to INEC to announce the results as obtained at the polling units and declare him winner to douse the breeding crisis before Saturday’s guber/state assembly elections in the area, arguing that if the result of the presidential and senatorial elections held alongside have already been released, there was no justification for withholding that of House of Representatives.

“The matter may result to voter apathy in the subsequent election as being rumoured in the area. Many stakeholders are weary of this kind of system where clear election results are withheld for no just cause,” he said.

Similarly, spokesman of the Iyanoba Traders Association, Mr. John Orie, said the traders who came out in their numbers to cast their votes for Obasa wanted him back to the house because the market has been enjoying relative peace with the natives since his tenure.