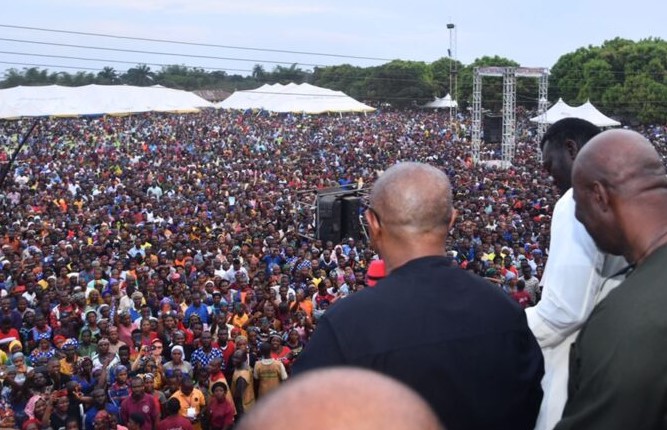 Presidential Candidate of the Labour Party (LP), Mr. Peter Obi, has a distant 13.67 per cent lead at 40.37 per cent over the Mr. Atiku Abubakar of the People’s Democratic Party (PDP) (26.7 per cent) in the Nextier Electoral Poll of Rural Communities in Nigeria.

The All Progressive Congress’ (APC) Bola Ahmed Tinubu is in third position a further down with 20.47 per cent in the opinion poll conducted on voters across the six geopolitical zones ahead of the February 25, 2023 presidential election.

According to the Nextier, Obi leads the voting intention with 40.37 per cent in the electoral poll it conducted among survey respondents in rural communities in 12 Nigerian states, and “Atiku Abubakar follows at a distant 26.7 per cent while Bola Amed Tinubu is at 20.47 per cent.”

It added: “Peter Obi has the highest net favourability of the presidential candidates among survey respondents at +30 per cent. Atiku Abubakar is at +17.3 per cent and Bola Tinubu at 4.98 per cent. Kwankwaso is at -8.70 per cent.”

Nextier said the poll showed that “Atiku Abubakar and Bola Tinubu are preferred by respondents with no educational attainments or people who chose not to disclose their educational statues.

“Eight out of 10 respondents are definite that nothing will make them change their minds and vote for another candidate.”

More so, “survey respondents stated that radio, social media and family/friends are the main channels through which they get information on the different presidential candidates.”

In the other highlights of the survey, Obi got the highest level of preference among all age ranges, with Atiku second in each of those groups except for the 65-74-year group.

He also has the highest preference among Muslims, while Peter Obi is preferred by respondents that self-identify as religious or not.

Atiku and Tinubu are preferred by respondents with no educational qualification while Peter Obi is preferred across most of the educational attainment groups.

Nextier said it “conducted a face-to-face poll of registered voters in rural communities in 12 states in Nigeria.

– Rural communities, per the survey, are in local governments without tertiary educational institutions

– The survey excluded the home states of the leading presidential and vice-presidential candidates.

According to Nextier, the survey has a sample of 2,000, and “generated a 2.2 per cent margin of error at a 95 per cent confidence interval.” The sample was representative of age and gender demographics in the states while all survey respondents are registered to vote in the 2023 elections.