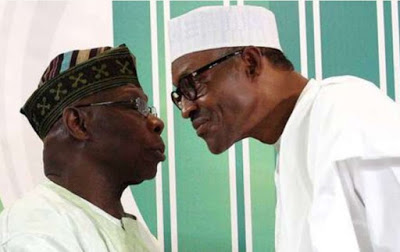 Senator Iroegbu in Abuja Former President Olusegun Obasanjo has again called out President Muhammadu Buhari for his inability to tackle the security challenges and orgies of bloodshed in the country. Obasanjo spoke Wednesday through former Governor of Osun State, Prince Olagunsoye Oyinlola, at a one-day national summit on insecurity and killings in Nigeria, convened by the Northern Elders Forum (NEF), Afenifere, Ohanaeze Ndigbo and Pan Niger Delta Forum (PANDEF). The event was also attended by a chieftain of the Arewa Consultative Forum, Prof. Ango Abdullahi; Ohanaeze Ndigbo President, Chief John Nwodo; PANDEF leader, Chief Edwin Clark; Afenifere leader, Chief Ayo Adebanjo; former Inspector General of Police, Mr. Suleiman Abba; former Ondo State governor, Dr. Olusegun Mimiko; and a host of others. He said the Buhari administration had done and was still doing serious damage to Nigeria’s commonwealth and heritage, insisting that the president’s team was not only incompetent but also incapable of addressing the killings and poverty in the country. The former president was adamant that the administration was confused and at its wits end while the nation was being left to drift perilously. He noted that instead of proffering solutions, the government had been busy “giving one unrighteous and unacceptable justification after the other”. Obasanjo also recalled the discussion he had with Ango Abdullahi about the danger to the nation’s democracy when he hosted him and other elder statesmen in Abeokuta some weeks ago. He said: “When you kindly paid me a visit a couple of weeks ago, we deliberated on the danger to our democracy, our common identity, our commonality of purpose, our dream and our unity in diversity. We lamented the harm that the present administration of President Buhari, by his action and inaction, has done and is doing to our commonwealth and our common heritage.” He said the country had never been so divided along religious and regional lines as at today with inexcusable killings and devastating poverty. Obasanjo, however, expressed hope that in spite of the unfortunate situations created by the Buhari government, his consultations with people had given him hope. Also speaking, Clark lamented that Nigerians were living in poverty, corruption and inequity. According to him, state governors who hitherto had no class had created one for themselves. “Even military governors were more liberal than the governors you have today who only think about themselves and not the people. If we keep silent, a revolution is coming, if we fail to take quality decisions, our children will not forgive us. I don’t care who becomes president as long as he is competent,” he said. In the same vein, the founder of Baze University, Senator Hakeem Baba-Ahmed, called for the retooling of the nation’s security infrastructure, which he said must be completely rebuilt on a new philosophy, structure and commitment to security as the prime function of the state. Baba-Ahmed, who is also a presidential aspirant, said there were compelling grounds for restructuring of the federal system in a manner that would benefit all sections and interests in the country. According to him, “In this respect, the recent initiative of the Senate to initiate a review of the Constitution towards creating state police should be supported as a matter of the highest national priority. “The amendments on devolution of powers should also be revisited by the national and state assemblies. Nigerians demand that their leaders must operate with requisite sensitivity to the challenges of our existence, and must put aside parochial and divisive sentiments in dealing with national issues.” Similarly, Mimiko called for urgent action against the killings, warning that the situation might get out of hand. He noted that some victims believed they were being attacked on the grounds of their ethnicity, religion and class. A former Inspector-General of Police (IG), Abba, blamed reckless speeches by politicians for the killings, insisting that they laid the foundation for the programme in Plateau State by creating enmity between the Hausa/Fulani and the indigenes. Abba disagreed with the opinion that state police could address the bloodshed, noting that only Lagos State can afford to fund its police force. “Is it a state that cannot pay teachers that would pay policemen? Do you know the cost of a gun; only Lagos is ready to fund state police,” Abba asserted. In its communique, the conferees said the summit was aimed at forging a national consensus on the key pillars required for building national security, unity and survival in a just and democratic society. It lamented that the country had witnessed “unprecedented incompetence and enthronement of mediocrity in dealing with the horrendous spate of killings and general insecurity across the country”. The communique which was signed by Clark, Abdullahi, Adebanjo and Nwodo read: “In the eyes of many affected communities, there appears to be palpable government complicity in the killings. These killings claimed 3,500 lives in 2017, a figure that could be much higher in 2018.” On the economy, the summit noted with dismay that the mismanagement of the economy had become characterised by significant loss of output, massive youth unemployment, rising level of poverty, instability and irregular migration of skilled and unskilled labour. It observed with concern that the nation has been adjudged to be more corrupt than it was in 2015 by the Transparency International, adding that it was alarmed by the flagrant disregard for the rule of law. The summit resolved to insist on the emergence of a visionary and dynamic leadership “which will deal with our security and economic challenges and ensure good governance in the country”. It demanded the revamping of the security architecture, removal of killers from the communities they have occupied and return of same to their rightful owners who now live in camps. The elder statesmen said they would strive to reach a consensus on the positions of the various Nigerian communities and arrive at an agreed template in the issue of federalism and restructuring.
Post Views: 851