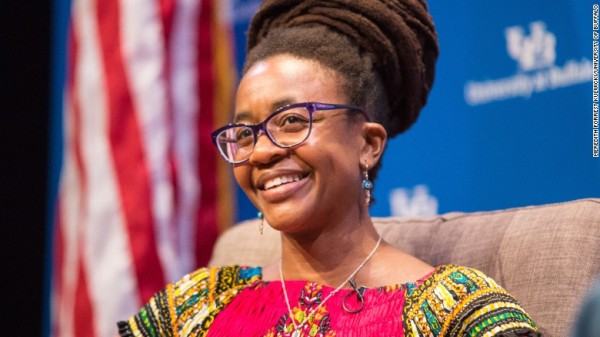 An award-winning Nigerian comic writer, Nnedi Okorafor, has been commissioned by Marvel Comics to write a book for Black Panther character, ‘Shuri’.

Shuri, who gained global acceptance and fan base after the release of the Hollywood blockbuster, ‘Black Panther’, is the younger sister of lead character, T’Challa.

Marvel is launching the comic in October.

Nnedi, 44, who had earlier written ‘Black Panther: Long Live the King and Wakanda Forever’, shared the news on her Twitter handle on Tuesday.

She wrote @Nnedi, “Announcement: I am writing Shuri. Black Panther’s sister is getting her own comic book series and it is happening so so soon.”

Her tweet confirmed the news already shared by Marvel Comics on their official website where they wrote, “SHURI will bring a domestic conflict to the princess’s table”.

Marvel also wrote, “While she is the most at home in her lab, working to keep her country at the forefront of science and technology, Wakanda is missing its leader. Without T’Challa around, Shuri will have to decide if she will forego her own passions in order to stand up for her nation.”

Marvel further stated that Nnedi, who is an acclaimed Afrofuturist writer, would write the series with art from Leonardo Romero.

One of her most acclaimed works, a novel titled Who Fears Death, not only saw multiple award nominations and a World Fantasy Award for Best Novel, but is also on its way to becoming an HBO series with George R.R. Martin as an executive producer.

She also won the Wole Soyinka Prize for Literature in Africa in 2008.

In July 2017, Okorafor announced via Twitter that “Who Fears Death” was picked by HBO to become a TV series.

💥Marvel has given Shuri (sister of T’Challa) her own comic series… and I’m writing it. Yup! 🤓!! Shuri is an African young woman of genius level intelligence who is obsessed with technology and has traveled spiritually so far into the past that she’s seen Wakanda before it was Wakanda. The Ancestors call her “Ancient Future”. And she’s super ambitious. What do I love about her? Alllll that and more. #wakandaforever 🙅🏾‍♀️ #nnediokorafor #marvel