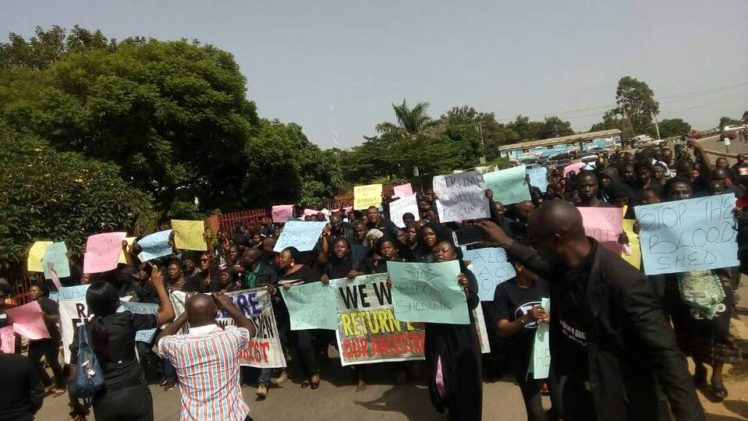 Violent protest rocked Jos, the capital of Plateau State, on Wednesday, as residents protesting the killings in three local government areas of the state by herdsmen invaded the state secretariat, destroying vehicles and buildings. The protest, which started peacefully, turned violent when youths and women damaged some cars parked at the New Government House in Jos and other offices. During the fracas, vehicles belonging to Peter Amine of the News Agency of Nigeria and Douglas Francis of Core TV, were damaged. The protesters, who had converged on the Old Airport Junction and marched to the Government House, were initially repelled from getting access to the premises.  Some of them climbed the fence to gain access to the Government House, forcing security agents at the gate to eventually open it. One of the protesters, Mafeng Gyendeng, expressed displeasure over the failure of the Plateau State Government to receive them. The Plateau State Director of Peace Building Agency, Joseph Lengmang, who was detailed to address the protesters narrowly escaped being lynched as he hurriedly scampered for safety. But some of the protesters chased him and the fleeing government officials, trying to stop them from leaving the premises. As they failed in their mission of stopping the fleeing officials, the protesters started to throw stones which hit cars and offices including the structure housing the offices of the Secretary to the State Government, Chief of Staff, Permanent Secretary (Government House) and other top government officials. The protesters defied pleas from security operatives who were forced to shoot into the air to disperse them. But they stood their ground demanding to see the governor so they could register their displeasure over the killings as well as his position on the ranching policy. Lalong was said to have gone to the hospital to visit about 50 victims of the attacks who were receiving treatment at the Jos University Teaching Hospital while the protest was going on. Meanwhile, Lalong has condemned the attack on the Government House by protesters, saying they would be fished out and punished accordingly within the confines of the law. According to him, the protest represented one of the saddest commentaries in the collective resolve of Plateau people to stand and be united against evil, adding that it constituted “a serious affront to the authority of the state.” “Government has identified the sponsors of this protest which resulted in the destruction of properties and will certainly bring them to account for their unpatriotic conduct. “While government mourns the loss of innocent lives and has extended deep commiseration to victims of the unfortunate attacks, with assurances that it will not rest on its laurels in fishing out the perpetrators, it will not fold its hands and watch disgruntled citizens throw the state into a state of anarchy and chaos under the guise of mourning “, Lalong threatened in a statement issued on Wednesday night by the Government House Director of Press and Public Affairs, Emmanuel Nanle. He regretted that while government was making efforts at sustaining the tempo of arrest and prosecution of those who had over the years threatened peace, and worked so hard to turn our state into the sad era of bloodletting, “unpatriotic elements have chosen to frustrate the intention.” The statement partly read, “…The governor finds it regrettable that while government has chosen to recognise the right of its citizens to peacefully assemble and protest within the confines of the law, the conveners of the protest under the joint auspices of the Christian Association of Nigeria (Northern Zone of Plateau State), Youth Wing of Christian Association of Nigeria (Plateau State) and Bazata Gospel Team allowed the protest to be hijacked by hoodlums who took advantage of the procession led by these organisations, to destroy government properties and vehicles of civil servants and visitors to the Government House running into millions of naira. “The governor views this attack on the seat of government as a serious affront to the authority of the state which should not be taken lightly because of the very clear and obvious unpatriotic self serving interest of a few who have chosen to make a mockery of the grief of the victims of the attack in Gashish District and other areas of the Northern Senatorial District. “Governor Lalong opines that the name of the Church as a moral rectitude should not have been associated in any way with any person or group of persons who would contemplate violence as a show of discontent especially in this period that all godly and peace-loving citizens are sharing in the grief of the bereaved, and calling on God in prayers and sober reflection for healing in the land.”
Post Views: 1,506