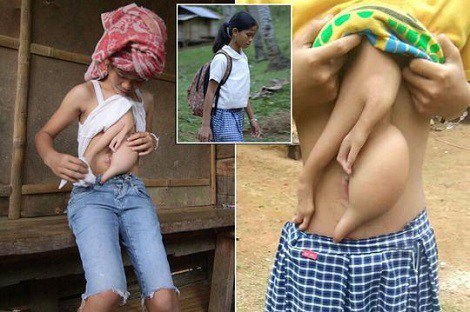 A teenager is finally getting medical help after living her entire life with two extra arms and fingers dangling from her chest.   Veronica Cominguez, 14, was born with the limbs and an oblong-shaped torso growing from her chest in Iligan City, Philippines. The extra parts – belonging to a parasitic twin whom did not develop properly – have continued to grow with her. She even cleans her living ”twin” and cuts their finger nails for them. But Veronica is now finally set to live a normal life after locals raised money and officials organised for her to fly to neighbouring Thailand for an operation.   Veronica said: ”When I was little, I thought it was just a foot. But as I grew up, it became bigger ”It’s heavy, it limits my movement. It keeps swinging. My dress often gets wet.”   Veronica’s mother, Flora Cominguez, said their family has a history of twins. She was not able to properly see a doctor during her pregnancy but said that she knew that it was twins. She even had a name for both of them.   Unfortunately, the other baby did not fully develop.
Post Views: 1,116