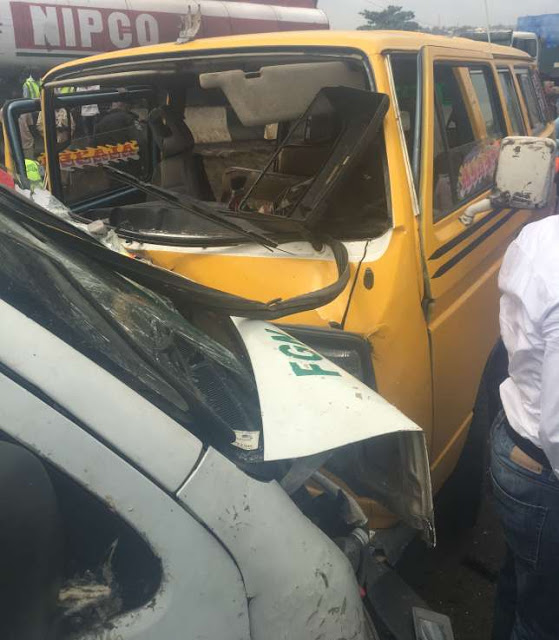 No fewer than 10 people sustained injuries. They have since been rushed to the hospital by emergency responders at the scene. Fortunately, no life was lost.

The commercial bus drivers, a yellow bus and a white Federal Government of Nigeria (FGN) assisted mass transit bus,  were said to be driving in opposite directions when the accident occurred.

Following Thursday’s fuel truck explosion, the emergency workers and traffic agencies had blocked a section of that road to enable them remove the 54 burnt vehicles and a tricycle.

With that blockade, motorists from inward Lagos who were heading out of Lagos and vice versa were directed to drive on one section of the road.

Although the movement of cars on one lane expectedly caused a huge traffic snarl, the traffic agencies were able to control flow of traffic until the two impatient drivers ran into each other.

According to eyewitness account, the two drivers were impatient and attempted to have right of way at the same time and it resulted in a head-on collision.

However, the accident affected the yellow commercial bus more than that FGN transit bus as it recorded more injured passengers.